Dutch designers Stefan Scholten and Carole Baijings have ceased working together under the studio name Scholten & Baijings after nearly two decades as partners.

Amsterdam-based designers Stefan Scholten and Carole Baijings announced on Tuesday that they will no longer work together as design studio Scholten & Baijings.

In an email addressed to "business partners" and "friends", the pair said that from now on both designers – who are also married – will work under their own respective names.

According to the designers, the Scholten & Baijing brand will continue to exist and will house all current collections.

For an initial two-year period of transition, the newly established Studio Stefan Scholten will supervise the existing Scholten & Baijings portfolio of products.

Scholten & Baijings was established by the husband-and-wife team in Amsterdam in 2000.

It is well known for its distinctive use of colour, for example in an installation for Fortnum & Mason at London Design Festival last year that played on the London department store's signature eau de nil branding. 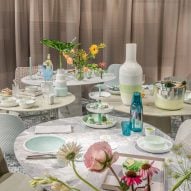 A collection of softly coloured porcelain plates and vases for the high-end French company Sèvres by the studio highlighted the pastel tones with concentric raised ridges.

The pair has worked with a number of leading brands including Hay and Maharam, for which the studio designed a collection of interior fabrics with a nine-metre repeat. This allowed an entire sofa to be upholstered without the pattern appearing twice.

It also hacked the Klippan sofa and Poäng armchair for IKEA, producing colourful covers and legs for the popular furniture items.

Earlier this year, Jessica Walsh severed ties with Stefan Seigmeiser after nearly a decade as New York design agency Sagmeister & Walsh to set up her own agency called &Walsh.

In an interview with Dezeen, Walsh decried the lack of female studio heads in the design industry and the sexism she has faced.

"When I started reaching a certain level of success and recognition in the design field, the amount of hate mail, jealous remarks and outright sexism I experienced multiplied exponentially," she said.