Paraguayan architecture office Bauen has completed a house in the forests of Guaira, which cantilevers off three concrete walls to project over the site's steep and lush landscape.

Casa Himmel, or Cloud House, was designed for a Paraguayan couple to settle down in for their retirement.

After identifying a steep and isolated site in the Guaira region, roughly 200 kilometres from the capital city Asunción, they enlisted local architects Bauen with the brief that the home should be as light on the landscape as possible.

"The clients found the ideal spot in a remote region, in which the main character would not be the architecture but the landscape itself," said Bauen's founder Aldo Cristaldo Kegler. "Keeping in mind these premises, 90 per cent of the house was already solved."

Three concrete walls are set into the slope, creating a platform from which steel-and-glass structure cantilevers.

Because of the difficult access to the site, Bauen chose to use shorter steel sections that would be easier to transport.

According to the architects, the primary structure was manufactured in 60 days, and assembled in only seven using bolted connections.

"The structural spans become the windows and are simply closed with glass," explained Kegler. "Every square metre of the project allows the striking surrounding view to pass through."

Roughly cross-shaped in plan, the interior living spaces are delineated by only a few walls.

Running perpendicular to the slope, the home's open-concept kitchen, living and dining room welcome visitors as soon as they enter through the front door. 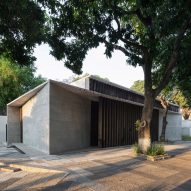 On either side of this volume are the private areas: the owner's living quarters to one side, and a home gym on the other.

At the highest point of the building, a covered terrace looks out over the mountainous landscape beyond. An exterior staircase leads up to a secondary roof terrace that is open to the elements.

Bauen's interiors were completed in a minimal palette of reflective white surfaces, with little furniture or other elements to distract from the views.

"Having the advantage of a 360-degree view of the mountain range, designing the house was not an arduous task," Kegler said.

Other projects in Paraguay include a home with a mechanically operable roof that tilts open like the lid of a box, by Javier Corvalán, and a synagogue in Asunción that was completed out of board-marked concrete and weathering steel.

The photography is by Federico Cairoli.