Board-marked concrete and warm wood are contrasted in this synagogue in Asunción, Paraguay, which has been renovated by local studio Equipo de Arquitectura.

Equipo de Arquitectura transformed an existing synagogue in the capital city for the Hebraic Union of Paraguay. The design preserves its perimeter walls and roof but concrete is applied to hide the original structure.

The concrete walls, which gain texture from imprints of wood planks, are paired with slatted metal walls. These are juxtaposed by the wood panelling that clads the interiors, which were refurbished extensively.

When tasked with redesigning the synagogue, Equipo de Arquitectura chose these materials as a reflection of the Jewish community.

"Rusted metal represents resilience, a characteristic of the Jewish community," it said. "Raw concrete displays strength and sturdiness to represent the temple's protection."

Jews arrived in Paraguay mostly from Europe in the early 1900s via a series of waves of migration. The community is currently about 1,000 people, with a number having left for Argentina or Brazil.

"The challenge of any ceremonial space demands a reflection that respects the religious essence and the culture that involves it," the studio added. "Imagining a space of introspection and prayer suggest a creation of silence, where rite becomes the main protagonist."

Equipo de Arquitectura designed the 375-square-metre synagogue based on "prisms" inside one another. "We began the design process by locating two prisms, one as a threshold and the other as the holy enclosure," said the studio.

"The concept of a prism inside the other is fairly simple, creating a cushion between the exterior, wide open and noisy, towards the interior, silent and spiritual." 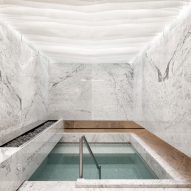 Slatted walls create a barrier between the internal ceremonial space and the busy street life beyond. A corridor is then created to mark the threshold between the two zones.

"The outer case works as a strongbox, controlling the access of the synagogue through metallic doors that protect the interior," it added.

Inside is an open space with concrete floors, rows of benches with blue cushions and a central altar or lectern, known in Judaism as a bimah.

The strips of dark wood that cover the walls add a sense of warmth and shelter are also great for acoustics and insulation.

The cladding extends upwards towards the ceiling, which features a series of truncated pyramids that culminate in lightwells. Other than skylights and a large window at the bimah, the religious space has no windows. Hardly any direct sunlight enters inside either.

Other synagogue designs, both of which are in Germany, include a religious centre in Mainz covered in green tiles and an Ulm building clad in limestone.

Photography is by Federico Cairoli unless stated otherwise.