Roberto Benito Arquitecto has completed a low-slung house in central Argentina with concrete walls designed to look like geological strata.

The project, called Vivienda Texturas – or Textural House – is located in San Francisco, a city in Argentina's Córdoba province. The horizontal dwelling sits on a 1,490-square-metre corner lot in a low-density neighbourhood.

The residence is intended to provide a suitable atmosphere for both quiet reflection and entertaining guests.

"It is a place designed for gathering with friends, but also to promote a peaceful and reflective life," said local firm Roberto Benito Arquitecto.

Throughout the house, the team sought to use unfinished materials that would give rise to a "textural architecture".

"The significance given to materiality, represented by the nakedness and honesty of some natural finishes, makes it acquire a great expressiveness," the architect said.

The single-storey house consists of rectilinear volumes that are interspersed with shaded patios. These outdoor voids are meant to establish a continuity between inside and out.

For the exterior walls, the team used irregular layers of concrete. 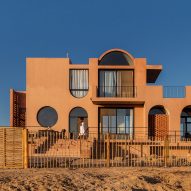 "Exposed concrete walls are cast in layers with different components in the dosage, giving it the appearance of geological strata," the firm said.

The home is topped with an overhanging roof that helps shade large stretches of glass. A thick fascia is wrapped in weathering steel.

"This large 'lid' is expressed as a rusted-metal sheet border that runs around the perimeter and, at some point, it volumises, reaching the floor," the team said.

At the core of the home is a square-shaped public area. The living and dining spaces are separated from the kitchen by a long, glazed partition.

The main room has an industrial feel owing to exposed columns, visible pipes and concrete flooring. Two sides of the room are glazed, while the other two are solid, allowing for the display of artwork.

Adjacent to the public zone are two bedrooms, which are linked by a common patio. Similar to other parts of the house, the sleeping area has a raw aesthetic.

Other homes in Cordoba include an "introverted" dwelling by Patio Estudio that is filled with internal patios, and a grand house by PSV Arquitectura that features overlapping layers of concrete and stone.