Trailing plants and a rope-lined staircase feature in the flagship store for a tea company designed by Brazilian studio SuperLimão.

The shop serves as the first brick-and-mortar location for Desinchá, a fast-growing tea brand that was started in 2017. The company is focused on selling products that promote good health.

Local firm SuperLimão was tasked with creating a retail space that would represent the brand and provide a memorable experience for shoppers. The chosen location was a 16-square-metre, two-storey space on Oscar Freire, one of the busiest avenues in São Paulo.

"With no way to grow sideways, the out-of-the-box solution was to verticalize and confuse the senses," the designers said.

The experience begins out front, where the team created a kinetic facade composed of metal leaves set within a grid of concrete blocks.

"Approximately 1,000 aluminium sheets inserted into the hollow concrete elements move with the wind, mimicking a treetop," the team said.

The front elevation also has a brightly coloured vending machine, which enables customers to purchase Desinchá products at any time.

Upon entering the shop, visitors encounter a light-filled space with wooden shelves and greenery. A staircase emerges from a bed of rocks and invites shoppers to head upstairs.

Rope was used to form the staircase railings and the risers between wooden treads.

"Little by little, the conventional store is transformed into a playful environment," the team said. 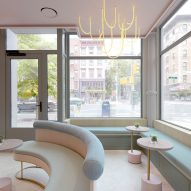 On the upper level, the team created a domed installation comprising more than 50 mirrors. Plants are reflected in the mirrors, giving the illusion of a vertical garden.

The domed installation serves more than an aesthetic function. The reflective surfaces direct sunlight to a large tea-making device called the Cold Drip, which floats in the centre of the stairwell.

Made up of borosilicate glass vessels, the device enables customers to see a special way of brewing tea using ice and sunlight.

"In an almost magical way, the sun's rays melt the ice, cold water drips into a funnel full of herbs, and this process slowly extracts all the essence and aroma of Desinchá," the team said.

Similar to boats, the team made use of every nook and cranny in the compact shop for storage and equipment. A small bathroom is hidden upstairs.

"Perhaps the most unusual solution is the bathroom on the upper floor, camouflaged behind a wooden panel," the architects said.

Other projects by SuperLimão include a dental office with pink accents, a cave-like beer hall with gabion walls, and a pared-down apartment in an Oscan Niemeyer-designed building.

The photography is by Maíra Acayaba.