Graphic designer Peter Saville has created his first-ever textile collection, Technicolour, which he designed together with Danish brand Kvadrat.

The collection was shown at Danish design festival 3 Days of Design, where Saville took part in a live-streamed interview with Dezeen editor in chief Marcus Fairs.

It was informed by the colourful sprays used to mark sheep that roam the countryside, which create patterns that Saville calls "rural graffiti".

The way in which the bright colours stand out against the white wool was replicated in the Technicolour collection, which features upholstery, rugs and curtains.

The designer had worked with Kvadrat before and the company encouraged him to create his own textile collection. Saville then worked with Stine Find Osther, vice president of design at Kvadrat and Dienke Dekker, Kvadrat's design manager for rugs, on the designs.

"It has its origins in my childhood – which is kind of weird for me, this collection is a bit like a biopic – but then came as an observation and as a concept during this period that I've known Kvadrat," Saville told Dezeen.

"It was about the way sheep are marked in the fields to distinguish ownership. I would look at this and it looked like graffiti in the countryside."

Seeing the colour used on sheep, Saville described it as "quite loose and random-looking", and thought of how it could be adapted to work on fabrics.

"I started to think, what would happen if those colours weren't washed out?" he said. "What if they made their way through the entire industrial process as a kind of rogue, random agent in the machine?"

The resulting collection features this concept realised in a number of different ways – as sheer, almost neon-coloured curtains, shaggy white rugs with bright tufts of colour, and even a discrete upholstery fabric in grey with flecks of other colours.

The way in which the sheep are marked, with one colour that denotes who the owner is and other colours used to mark things such as lambing and vaccinations, is the whole premise of the project.

But Saville says that, without him noticing it himself, it also ties back to earlier work he has done. 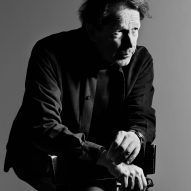 "Someone said to me: 'well, it's colour coding, Peter, isn't it, again?'" he said. "And I thought, I've done colour coding before – I'm quite known for doing colour coding. And yet I hadn't quite seen it as that."

"You do what you do. And there are certain things that you do instinctively and automatically and that's who you are. And this is actually all about colour coding."

This is the first collection from Kvadrat that is designed by a British designer and uses wool from the UK that has also been woven and dyed in the country.

While Find Osther says the collection has the potential to be commercial, she adds: "We had no rules – it's 100 per cent gut feeling, this collection."

To Saville, seeing the samples come back when the collection was being developed was "like Christmas time," he said.

"It was like a great surprise to see the sampling begin to come back and seeing the whole thing evolve."

"And some of it was totally unexpected – I mean, the rugs are almost what I imagined in my mind's eye, but these upholstery textiles are much more subliminal; I couldn't imagine this, because I don't understand the processes well enough," Saville said.

"And I did not expect these net curtains. They're kind of phenomenal."

Saville is known for his album cover designs for Manchester-based record label Factory Records, which he began working with in the late 1970s.

Danish textile brand Kvadrat has previously worked with designers including the Boroullec brothers, and CEO Anders Byriel recently spoke to Dezeen about how he believes Denmark is in a "new golden age of design".

Photography is by Benjamin Lund.

Technicolour was launched during 3 Days of Design in Copenhagen, Denmark. See Dezeen Events Guide for an up-to-date list of architecture and design events taking place around the world.