Legendary designer Peter Saville has revealed the inspiration behind his early work for Factory Records, saying the influential covers featured "things that I saw and wished were part of my reality".

Speaking at the launch of his fabric collection Technicolour for Danish brand Kvadrat at 3 Days of Design in Copenhagen, Saville talked to Dezeen about his design process and how his early work has influenced popular culture.

The British designer is known for his work for Manchester record label Factory Records, which he started designing posters and eventually album covers for in the late 1970s.

Saville would go on to create some of the most famous record covers of all time, including Joy Division's Unknown Pleasures and New Order's Blue Monday. These early designs were informed by things Saville felt were missing in his own life.

"The material that informed the early work was about things I didn't have," he told Dezeen editor in chief Marcus Fairs in a live-streamed interview.

"It was about things that I saw and wished were part of my reality."

His covers often featured nods to art and design styles that he had come across and was curious about, which were then transmitted to a larger public via the album designs.

"I would go to the college library, and I would pick up a book on the De Stijl movement in Holland in the 1920s and 30s," Saville said. "And I would look around me in Manchester in 1970 and say, where is this?"

"I did have this free medium of the record cover," he added. "So I used that medium to quote things that I wanted to see, and it turned out that they went to people and some of those people felt the same."

Among those record sleeves were ones that would go on to have a huge impact on contemporary design, including New Order’s second studio album, 1983’s Power, Corruption and Lies.

This featured a 19th-century Henri Fantin-Latour oil painting of flowers that Saville believes brought a then-abandoned aesthetic back into the design world.

"I didn’t see why floral aesthetics had been abandoned, other than flower power in the Sixties," he said. "So that kind of rococo floral motif was something that I thought had a place in popular culture. And it did."

"It turned out to be kind of an endorsement of cool, and we’ve seen a lot of flowers in fashion and contemporary culture since then."

Saville’s early work has influenced designers and brands in genres from music to fashion and cars. However, he says it has taken a while to get to the stage where he is once again a go-to name for design collaborations.

"I had 10 years in the beginning with music and then with fashion, and then there was a difficult 20-year period between, say, 1990 and 2010, when people weren't really clear how or why to work with me," Saville explained.

"And in the last 10 years, that's changed quite dramatically," he added. "The most significant thing is that the people who the earlier work touched, influenced and inspired, channelled that through their respective sectors, whether they were in fashion, photography, film, architecture or textile."

Once the people whose work he had influenced became successful in their own work, they began to approach Saville for collaborations.

"They became decision-makers in their respective fields," he said. "And then gradually they would come to me. So it was the middle period where there was a generational difference, and – it's bad to say – it's understandable that the older generation didn't quite see or understand what I was doing."

"You had to wait until the ones who did had the opportunity."

Saville’s Kvadrat collection, called Technicolour, features upholstery, rugs and curtains, and references the colourful spray paints used to mark sheep that roam the UK countryside to show who owns them.

The designer compared his design process when working on the collection, which is his first-ever textile project, to his early record sleeve designs. 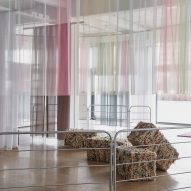 "There is actually a very evident correlation here with the early work I did when I was doing record covers," he explained. "Some of those covers, and particularly the ones that are most known, were entirely autonomous exercises for me."

"I was afforded the medium of the record cover for my own indulgence," he added. "There was no brief, there was very little collaborative discussion; with the New Order covers, there wasn't exactly a single person who was the gatekeeper and that work was a free medium of expression for me."

This is in contrast with his graphic design work, which Saville says is about articulating the requirements of others, but similar to the way in which he designed the Technicolour textile collection.

"This project with Kvadrat is therefore, ultimately, the closest that I've done in 25 or 30 years – other than one or two art projects – this is the closest equivalent to being able to transport an idea uncompromised from one place to another," the designer said.

Archive project and Aston Martin identity in the pipeline

As well as the project for Kvadrat, Saville is currently working on a big archive project of his own designs and a "a little renewal" of the identity for British luxury car brand Aston Martin.

This came about after he spoke to the brand's head of design Marek Reichman about the iconic Aston Martin wings, suggesting they could use an update.

"I was a little bit critical of the wings," Saville said. "I thought, the cars are getting more and more modern but the wings still look a little bit mid-century, and he said, 'I agree'. Then, surprisingly, at Christmas, he sent me a message saying 'Do you want to look at the wings?'"

"So I've been doing that – very tentatively because it's almost sacrosanct," he added. "There's the wings and once you do that you begin to look at the typeface, so there's a graphic work."

The new Aston Martin identity will be unveiled next year, Saville said, citing the lengthy timeline involved when working with cars.

"I have the idea, but it would be inappropriate for me to try talking about it," he said. "It's about colour and there will be another kind of shifting of context."

In an interview with Dezeen, Kvadrat CEO Anders Byriel said that Copenhagen is currently experiencing a new "golden age of design" that sees it rivalling Milan.

Main photograph is by Nick Knight.