The property is named Five Shadows after the five distinct volumes that make up the 12,800 square-foot (1,100 square metres) estate. "The house, reminiscent of a homesteader's settlement, is composed of five connected, symmetrical, agrarian-inspired forms," said CLB Architects.

The term refers to the Homestead Acts, a set of laws in the United States enacted after the civil war that allowed any adult male to claim up to 160 acres (65 hectares) of government land as private farmland.

This spurred the development of the country's Western frontier, including what's known today as Wyoming. These settlements were often built with modest means, and were characterised by simple gabled roofs.

CLB Architect's project is a single-family home, which lays out the owner's program into several similar volumes laid out around a series of exterior terraces and a pool.

"Slightly elevated above neighbors, the compound imparts a feeling of privacy, screens nearby buildings through structural orientation and strategic window placement, and takes in broad views across the valley to the Gros Ventre Range," said the studio, which is based in Jackson Hole, Wyoming, and Bozeman, Montana.

"The largest form hosts the public spaces, while the peripheral volumes capitalize on privacy for bedrooms and a den," the architects explained.

Three of these buildings, which are connected by glazed walkways, contain  four of the home's bedrooms. The last structure is off to the side, and contains a pool house. 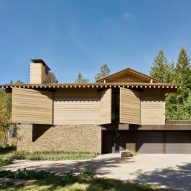 "The layout of the multiple buildings lends an elegance to the flow, while the relationship between spaces fosters a sense of intimacy," according to the architects. In the clearings between the buildings, the architects included a range of different spaces, such as an outdoor dining area and lounge.

Guests enter the home via a double-height glass lobby, where a monolithic black door on an offset pivot is framed by two large cabinets for storing coats. A gallery then leads to the main part of the home, for entertaining guests.

An open-tread staircase leads upstairs, where there are two additional bedrooms that bring the total to six.

Here, two separate living rooms at either end of the main gabled structure frame a large dining area, allowing for several groups to gather at once. To delineate the space, the architects include two fireplaces that help separate these areas from one another.

The interiors, which were designed by Philip Nimmo, feature a bright palette of rift-sawn white oak boards on the walls, floors, and ceilings, with black steel detailing and a stone that matches the exterior cladding. The restrained choice of materials emphasises the home's "deep connection to the outdoors".

CLB Architects has completed several homes in Wyoming, including a property with a black steel exterior that is intended to weather and rust over time, and a home belonging to studio co-founder Eric Logan, which he renovated with a pitched steel roof.

The photography is by Matthew Millman.