Despite a growing number of companies touting their environmental initiatives, the designer revealed that in product development meetings "cost is always the conversation".

"Unless you can stand up in front of the C-suite of a company and justify how something generates the same or more revenue, then the sustainability question isn't even considered," Hubert explained.

"The reality is, particularly for big companies, unless they can see dollar signs next to advancements it's very difficult to get them to trade off."

To make a difference, designers have to learn to advocate for the necessary material innovation and retooling from a business perspective, he said, and actively seek out companies that are willing to make these investments.

"I think the thought leaders will lead and everyone else will follow," he said. "So it's about finding and engaging with the right people."

The designer made the comments as part of a live Dezeen panel talk with Andreu World CEO Jesús Llinares to mark the launch of the brand's new book Conversations About Work, which looks at the working practices of eight renowned designers.

Hubert is featured alongside Patricia Urquiola and Philippe Starck after collaborating with the Spanish furniture brand on the Hula stool and the upcoming Triada table, both made from infinitely recyclable aluminium.

According to the designer, Andreu World is among the companies that have shown leadership in the sustainability space by investing heavily in research and development around new materials.

And by 2025, the company is aiming to make all of the materials in its product catalogue circular. 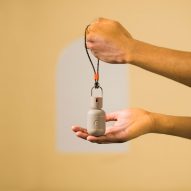 With this aim, the brand launched three proprietary materials last year including a thermoplastic called Pure ECO and a synthetic yarn called Circular ONE, both made from recycled plastic and recyclable at the end of their life.

The final material is BIO, a bioplastic synthesised by living microorganisms, which the brand claims is both recyclable and compostable as well as having a carbon footprint equivalent to that of wood.

"Now, it's only available in some colours but in the next few years, we want to do it for the whole catalogue," Llinares said.

"We want to work through the designs that we have in our actual portfolio one by one to see how we can optimise the circularity."

Production will be carbon neutral by 2025

Whether the final products are considered circular will depend on how often they can be recycled and whether they are recycled at all, which is only the case for around nine per cent of plastics globally.

Unlike companies such as Takt and Sebastian Cox, Andreu World has not shared a goal for reaching net-zero emissions as a business in line with the targets set out in the Paris Agreement.

But the brand has committed itself to an intermediate goal of making its production carbon neutral by 2025.

Beyond moving away from virgin and fossil fuel-based materials, this will see Andreu World switch to all renewable energy by the end of next year and build a dedicated solar farm for its new production centre, set to open in early 2022.

The company, which was founded in 1955 as a family-run wood workshop, has already sourced all of its timber from FSC-certified sources since 2006, helping to bring down the carbon footprint of its furniture.

In 2007, Andreu World started offering a five-year warranty for its whole catalogue, which was later increased to ten years to extend the lifespan of the products.

Today, all of the pieces are backed up by international environmental certifications including the furniture sustainability standard Level, which is set out by the Business and Institutional Furniture Manufacturer's Association (BIMFA) in America.

According to Llinares, the brand is also working on attaining the Cradle to Cradle certification for circular, responsibly made products.

"Sustainability for us is mandatory," he explained. "There is no choice."

"Obviously, companies have to be economic but that's the challenge," he continued. "And it's a beautiful challenge."