Described by the RIBA Award judges as "high quality at every scale", the six-storey Town House in Kingston upon Thames was designed to act as "the university's front door".

The building was a surprise winner of the annual award for the UK's best building, with Marks Barfield's Cambridge Mosque the bookmakers favourite to win.

The building contains the university's main library and archive, as well as a theatre, dance studios, teaching spaces and cafes.

It is fronted by a distinctive, 200-metre-long, multi-level colonnade made from reconstituted stone to recall the facade of the neighbouring Surrey County Council building.

"Wrapping the building in a tall colonnade gives it presence on the street, successfully balancing the need to make a landmark statement with the wider need to respond respectfully in size and scale to its context."

The 9,400-square-metre building is arranged around a statement staircase that rises to the top of the building and a series of large open communal spaces. Grafton Architects designed the building to be a welcoming, homely space for students.

"We imagined a place where students would feel at home," said Grafton Architects. "This building is about people, interaction, light, possibilities." 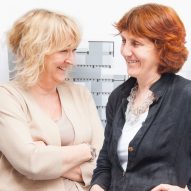 "It is about connecting to the community, the passer-by, an invitation to cross the threshold; a three-dimensional framework with layers of silence and layers of sound. Space, volume and light are the organisers," the studio continued.

"The building edges are not boundaries but active gathering spaces, terraces, galleries. Being outside under the big sky is always just a few steps away."

British architect Norman Foster, who was head of the Stirling Prize jury, described the building as "the future of education".

It is Grafton Architects' first Stirling Prize win after the medical school at University of Limerick was shortlisted in 2013. The award is the latest recognition for Grafton founders Yvonne Farrell and Shelley McNamara, who were recently awarded the 2020 RIBA Gold Medal and the 2020 Pritzker Architecture Prize.

RIBA's Stirling Prize has been awarded annually since 1996, with the exception of last year when it was delayed due to coronavirus, to buildings deemed to have made the most significant impact to British architecture.

In 2019, the last year the prize was awarded, Mikhail Riches' Goldsmith Street social housing won, while in 2018 it was awarded to Foster + Partners' Bloomberg HQ.

Photography is by Dennis Gilbert unless stated.