South East Faversham is a proposed extension to Faversham, a market town in Kent, England, located 48 miles from London.

The town will be built on land owned by the Duchy of Cornwall, which is a private estate founded in 1337 in order to fund projects attached to the Prince of Wales – currently Prince Charles.

The Duchy has designed the project with Pentreath, an English architect and interior designer, and landscape architect Kim Wilkie.

South East Faversham will comprise 131 hectares of rural land to the southeast of Faversham, positioned between the A2 Canterbury Road and the M2 motorway.

Dissected by two roads and the Faversham to Canterbury railway line, the new town aims to provide housing for a mixed-income community.

"The Duchy has drawn together an emerging master plan to deliver 2,500 homes with an aspiration to provide 2,500 jobs," said the estate.

"The proposals are to bring forward a very high quality, sustainable, mixed-use settlement that will become a thriving new urban extension to the town." 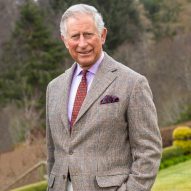 Described as "landscape-led," South East Faversham will be designed around a grid of tree-lined streets with a central green, as well as a cricket pitch and a pub.

A local primary school will be built alongside various shops and other amenities that will link the community through walkable distances, in order to encourage sustainable living.

The town will have an emphasis on green space in the form of orchards, allotments, meadows and wooded cycle paths.

"The plan has also been mindful of the air quality and acoustic impacts of the M2 and A2 Canterbury Road," the Duchy said.

South East Faversham aims to follow the LETI Climate Emergency Design Guide, which aims for buildings to achieve the UK's goal of becoming net-zero by 2050.

Pentreath is also responsible for developing Poundbury, an earlier town extension commissioned by the Duchy in Dorchester.

According to the estate, there are also plans to include ADAM Architecture, Francis Terry Architects and local firm Clague Architects in the South East Faversham project.

Currently, work is scheduled to begin on the town's cricket ground and football club training pitches in 2023, while the rest of the development will begin in 2024 or 2025 subject to planning approval.

The images are courtesy of the Duchy of Cornwall. All sketches are by Ben Pentreath.