Architects could soon be designing homes and other buildings using nothing but biomaterials, according to Biobased Creations CEO Lucas De Man.

De Man believes that natural products such as timber, hemp, straw and mycelium could completely replace polluting, non-renewable materials such as steel, plasterboard and cement.

Buildings "definitely could be" made exclusively from plant-based products plus natural mineral materials such as earth and lime, said De Man, whose company is behind an all-natural showhome built at this year's Dutch Design Week.

The project aims to prove that biomaterials can be used to build houses at scale and features 100 different plant-based or natural materials that are commercially available already or launching soon.

According to De Man, the same materials could be used to build large-scale buildings such as offices and schools.

"For bigger skyscrapers, I think you still need concrete for the foundations," he said after giving Dezeen a tour of the showhome, which is called The Exploded View Beyond Building. "But the concrete can be without cement, so the impact is way less."

"Practically it is already possible"

However, the construction industry will need a radical overhaul to achieve this, according to Pascal Leboucq head of design at Biobased Creations.

"Right now only three per cent of materials are bio-based, so there's a long way to go to get to 100 per cent," Leboucq said.

"Practically it is already possible [to build with biomaterials]" he said. "There will be more attacks on CO2. It will be impossible to keep on going the way we are going now."

De Man also believes that the construction industry will eventually embrace the principles of the circular economy.

"I think the biggest shift will be our concept of time," he said. "Now we want to build everything forever, for eternity. I think we have to embrace the fact that things are temporary." 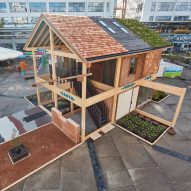 Based in Amsterdam, Biobased Creations works with biodesigners to showcase natural materials at events and festivals.

The showhome at Dutch Design Week in Eindhoven also features materials made from algae, bacteria, jute, linen, food waste and sewage. The products used are listed on the projects' website.

In 2019 the studio produced The Growing Pavilion, a small temporary performance space at Dutch Design Week that was made of mycelium.