Designer Remi Connolly-Taylor has designed Maryland House in London, which features a glass brick enclosed staircase, as her own home and studio.

Set at the end of a row of terraced houses in east London, the brick house was designed as a home that has a dedicated workspace for Connolly-Taylor, who is the founder of London studio Remi CT.

"When I returned from New York, I noticed the current housing market didn't reflect my needs," Connolly-Taylor told Dezeen. "I started Remi CT in 2017 and like most young professionals, needed a space to work and create from home."

"Maryland House's core concept was the desire to shine a light on other lifestyles in London as the traditional layout does not reflect the diversity of the city and functional homes are lacking for young professionals," she added.

The home's functions are stacked vertically with two bedrooms located on the ground floor and an open-plan kitchen, dining and living space placed in the basement.

The entire top floor of the house is given over to a dedicated studio space that opens onto a small balcony with a glass brick balustrade.

"The traditional hierarchy of the home was challenged during the development of the design," said Connolly-Taylor.

"Usually, traditional home layouts place emphasis on larger kitchens or family sitting rooms. We wanted to speak to the younger generation and young professionals through this design," she continued.

"We focused on creating a workspace that wasn't an afterthought. We wanted the space to be a destination within the home that one would want to work from."

Connolly-Taylor designed the home around a red, statement staircase that is wrapped in a glass-brick wall.

This allows natural light into the home and, along with a lightwell, helps to make the basement feel like a bright space. 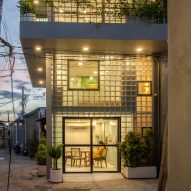 "The glass blocks were a strategic design choice," said Connolly-Taylor. "The dwelling's mass was curated around how the natural light would enter the home."

"I wanted to create a naturally-lit staircase that acts as a spine to the house," she continued. "We needed to maintain natural light standards to the adjoining neighbours and within the home so the glass blocks were able to allow light to filter through while creating privacy."

Overall Connolly-Taylor aimed to create a calm, pared-back series of spaces that are punctuated with "grand moments", like the staircase.

"Beauty in minimalism and creating grand moments on an 8.5 by nine-metre plot were also very important to this build," said Connolly-Taylor.

"For instance, when standing in the living room you do not feel like you are standing in a traditional basement," she continued.

"Natural light floods down from the skylight, garden, and staircase creating an illusion you are above ground. Elements of grandeur are felt by the 3.1-metre ceiling heights in the basement, and the open staircase views to the first floor."

Other recent London houses featured on Dezeen include a row of "ghostly" terraces designed by Fraher & Findlay, a home by Satish Jassal Architects that peaks above a brick wall and a compact house on the site of a former garage.

Photography is by James Retief.