"UCL has been deeply troubled to learn about allegations of unacceptable behaviour at The Bartlett School of Architecture and we have appointed an external agency, Howlett Brown, to carry out an independent investigation into the culture and behaviours in the School," said Sasha Roseneil, pro-provost of equity and inclusion at UCL.

"We are aware that unacceptable behaviour takes place at UCL"

Consultancy Howlett Brown will investigate a series of claims that were first brought to light by former student Eleni Kyriacou and revealed in the Guardian in May.

Initially, Kyriacou compiled a dossier from 21 people who alleged staff sexually harassed female students and made derogatory comments about race.

Since then, further students have come forward, with a group named Bartlett United now representing 70 former students and staff.

"We are aware that unacceptable behaviour takes place at UCL, and we are committed to fully understanding the issues and to addressing them," said Roseneil.

"This is a complex investigation and we ask for patience"

According to UCL, the investigation will be carried out independently, with Howlett Brown set to make recommendations to the university early next year.

"UCL has asked Howlett Brown to report back with recommendations at the beginning of 2022," said Roseneil. "This is a complex investigation and we ask for patience while Howlett Brown conduct their work."

"This independent investigation will provide recommendations for changes at The Bartlett School of Architecture, to ensure that all its students and staff are treated fairly and are able to thrive," she continued.

School is "keen for students and staff to share their experiences"

UCL is asking current and former students of the Bartlett, which is based in Bloomsbury in a Hawkins\Brown-designed building, to share their allegations with Howlett Brown.

"As part of the investigation, we are keen for students and staff (current and former) to share their experiences of studying and working at the School with Howlett Brown," said Roseneil.

"Their investigation will be carried out separately from the university, and UCL and The Bartlett School of Architecture will not have access to any identifiable information from current or former students or staff who come forward." 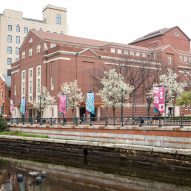 Disappointed with UCL's progress investigating the allegations, Bartlett United recently hired a lawyer to pursue "breaches of a serious nature" at the architecture school.

It also recently launched a campaign to raise £2,500 to fund a further investigation and legal review.

The Bartlett is currently looking for a new director to replace current director Bob Sheil when his second term in the role comes to an end in 2022. Sheil's move predates the recent controversy over alleged discrimination at the school, and he will return to his former position as a professor at the school.

The Bartlett is the latest but not the only architecture and design school to face allegations of discrimination. Rhode Island School of Design recently announced a series of initiatives to tackle "multiple racist issues".