This cabin in the Alpokalja forest near Kőszeg, Hungary, was entirely built on stilts as an isolated getaway that would harmoniously integrate with the surrounding trees.

The project was designed to be built by a single person. After having collaborated with Béres Architects previously, the owner, Attila Hideg, enlisted their help to design a wooden cabin for him to build himself.

Raising the structure on stilts facilitated the construction process, as no foundations needed to be dug for the building. This also allowed the team to locate the cabin close to existing trees without disrupting their roots.

"We respected the natural values of the site at extraordinary levels," architect Attila Béres said.

"Thin stilts are carefully located so that we could keep and protect the roots of the surrounding trees. No need for any excavation or filling with machines that ruin the natural context."

The building's exterior is a uniform greige colour that is meant to contrast the interior finishes.

"The warm and cosy interior is wrapped in a rough surface that lets the forest create colours and patterns after its own taste," the studio said.

The cabin consists of three rooms – a combined kitchen and living space, a bathroom and a bedroom. A storage shelf runs the entire length of the building, providing some continuity between the rooms.

In the kitchenette and the bedroom, exposed wood planks on the walls and ceilings create bright interior spaces for daytime use.

The bathroom, meanwhile, has a darker finish that contrasts the other rooms.

The interiors include several space-saving features within the cabin's limited footprint, such as a niche in the living area built into the window sill, and pocket doors between each room.

"One of the project’s design cornerstones was the effort of staying small," the studio explained. "No unnecessary spaces, no leftovers, no wasted square metres. This is the starting point of being environmentally friendly." 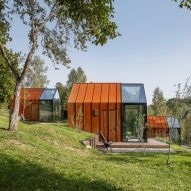 The house does not use any mechanical cooling system, as its windows are positioned to allow for natural ventilation. Heating and hot water, meanwhile, is provided by electricity.

Béres Architects is led by Attila Béres. The Budapest-based studio has also completed an apartment in Kőszeg, exposing the walls of a 400 year-old building that had been covered over the years by previous renovations.

Other tiny home projects include a van in Ecuador that was outfitted with plywood interiors and a home that architect Takeshi Hosaka designed for himself in Tokyo that measures only 19 square metres.

The photography is by Tamás Bujnovszky.