Norman Foster has joined a growing number of architects calling for green building certifications that take embodied emissions from materials into account in order to meet net-zero carbon goals.

Speaking in a talk with US climate envoy John Kerry during the COP26 climate conference, Foster pointed out that sustainability standards such as LEED and BREEAM focus on user wellbeing and operational omissions but neglect embodied carbon.

"Many of the standards that can rate a building environmentally, like LEED and BREEAM, are to be encouraged," he said.

"What we're realising now is that none of these ratings assess the embedded carbon in the materials that make the building."

To create sustainable cities, Foster argued we need to pursue "higher standards" for buildings that take into account their whole-life emissions.

"The building itself is part of a wider sequence, which involves transport, movement, operating and eventually decommissioning," he added. "So in that sense, we have to take a much broader, wider look.

Embodied carbon emissions account for half of an average building's carbon footprint.

But currently, no standardised certifications or regulations existto measure and reduce these emissions.

The UK government's net-zero strategy, which was released last month ahead of COP26, similarly prioritises decarbonising buildings' heating and electricity while neglecting to set targets for reducing emissions from the construction supply chain.

Other architects including Andrew Waugh have been lobbying for embodied carbon standards, alongside industry groups such as the Royal Institute of British Architects, the Architects Climate Action Network (ACAN) and environmental advocacy group Part Z. 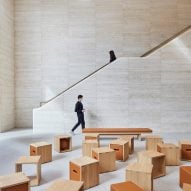 Foster + Partners has itself been criticised for ignoring embodied carbon in favour of operational carbon in the sustainability assessment of its projects.

The firm's Bloomberg Building in London, which was awarded the Stirling Prize in 2018, was dubbed "the world's most sustainable office building" and certified with the highest possible BREEAM rating.

But according to Open City director Phineas Harper, the firm's internal sustainability analysis failed to consider the embodied emissions of the building's sandstone cladding, bronze facade fins and deep concrete foundations, which generally make up an outsized part of the footprint.

The built environment is set to be discussed by world leaders during a dedicated half-day at COP26 this month, in a bid to tackle the 40 per cent of global emissions that can be attributed to the sector.

Waugh, who is attending the conference, told Dezeen he hoped the event would encourage governments to set "confident embodied carbon regulations" and requirements to disclose a project's carbon footprint.

"How about published carbon emissions on the front of every project, planetary health warnings like on a cigarette packet," he said.

The photography is by Nigel Young courtesy of the Norman Foster Foundation.

COP26 and its surrounding activities are taking place in Glasgow from 1 to 12 November 2021. See Dezeen Events Guide for all the latest information you need to know to attend the event, as well as a list of other architecture and design events taking place around the world.