Day eight of the Dezeen 15 digital festival featured a live interview with curator Beatrice Galilee, who explained why she thinks our understanding of design needs to expand to include culture created by people outside the profession.

"The radical architecture of the future may come from architects who refuse to build at all," she writes in her manifesto titled The Design We Can't See.

"The time when designers had the luxury of focusing only on end products has come to a close," she added.

Instead, Galilee argues that architects and designers must look beyond designing buildings and products and design for the systems and people it has previously overlooked. 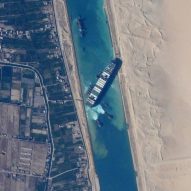 Galilee is a New York-based critic and curator who founded The World Around architecture conference. She is also the author of the book Radical Architecture of the Future, which was published by Phaidon earlier this year.

The Dezeen 15 festival features 15 manifestos presenting ideas that could change the world over the next 15 years. All contributors will also take part in a live video interview. See the line-up of contributors here.

The portrait of Galilee is by Sangwoo Suh for PIN-UP.