The UK parliament has published a briefing note outlining possible strategies to reduce the whole-life carbon emissions of buildings in England, including encouraging the reuse of existing buildings and the use of low-carbon materials.

The parliamentary briefing note, or POSTbrief, was published by the Parliamentary Office of Science and Technology (POST) branch of the UK Parliament in support of the UK's target of net-zero emissions by 2050.

The note, which cites statistics from organisations including the UK Green Building Council (UKGBC) and the Climate Change Committee (CCC), spotlights the environmental impact of buildings in Britain and focuses specifically on strategies to reduce whole-life emissions of buildings in England.

"Buildings contribute a significant proportion of the UK's carbon emissions and play a key role in achieving net-zero emissions targets," the briefing states.

"This POSTbrief explores the emissions associated with buildings, from design to end of life, and presents an overview of the opportunities for reducing their carbon impact."

The built environment is widely regarded as being responsible for around 40 per cent of all greenhouse gas emissions worldwide. 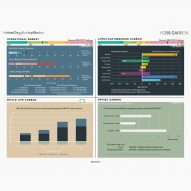 While the report states that "there is no agreed figure for the whole-life carbon emissions from buildings in the UK," in 2019 the CCC reported that the operational carbon of all buildings made up 18 per cent of the UK’s total emissions, while 13 per cent came from the manufacturing and construction sectors, which includes the embodied carbon emissions of buildings in those industries.

To date, the majority of UK regulations surrounding decarbonisation of the built environment focus on the operational carbon emissions of existing buildings. There is currently no embodied carbon regulation in the UK.

Reusing buildings is a key strategy

However, one of the key strategies in the briefing is limiting embodied carbon emissions by encouraging the reuse of existing buildings over new construction projects.

"Many experts have highlighted that since the majority of the embodied carbon of a building is associated with the structure, there are significant carbon saving opportunities for repurposing buildings, rather than demolishing them," the report states.

It states this can be supported by a reduction in value-added tax (VAT) for building refurbishments, bringing it in line with the VAT for demolition and new builds.

"Repurposing existing buildings is not always cost-effective, in part due to the VAT costs associated with refurbishment, which do not apply to demolition and new-build," the report adds.

Where new buildings are required, the briefing note cites the UK Green Building Council's recommendation that they are designed to be repurposed and disassembled, and where demolition can not be avoided, that waste materials are "diverted from landfills".

Another strategy in the POSTbrief is the introduction of policies that encourage "resource-efficient construction and use of existing low-carbon building materials".

"Experts have called for the Government to establish whole life carbon targets and policies and that improve material efficiency and carbon performance of buildings and infrastructure, including the reuse of materials and components," the report states. 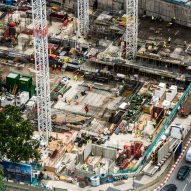 It proposes the use of materials including timber and stone, cement-free concrete, and recycled or reused steel – reducing reliance on traditional concrete and steel that have high embodied carbon.

In recent years, a number of campaign groups and industry institutions have created tools, guidelines and campaigns to encourage architects to address the whole-life carbon emissions of their projects.

The Architects Climate Action network launched a campaign calling for tougher building standards in the UK that require regulation of embodied carbon.

Outside the UK, the French government has announced a sustainability law that will ensure all new public buildings are built from at least 50 per cent biomaterials, while in the Netherlands, the city of Amsterdam has mandated that 20 per cent of all new housing projects in the capital must be constructed with biobased materials from 2025.

The photo is by Roberto Catarinicchia via Unsplash.