North Norfolk MP Duncan Baker is set to propose a bill to the UK Parliament today that would make it mandatory to calculate and reduce the embodied carbon footprint of new buildings for the first time.

If passed into law, the Carbon Emissions (Buildings) Bill would require building regulations to be amended to limit the roughly 50 million tonnes of CO2 that are emitted from the materials and construction of buildings in the UK every year.

"That's more than aviation and shipping combined," Baker, a Conservative member of parliament (MP), wrote in a column for North Norfolk News.

Baker's bill hopes to expand on the government's strategy for reaching net-zero emissions by 2050, which was widely criticised for neglecting embodied carbon in favour of focusing on operational emissions from heating and powering buildings.

"It strikes me that when we are decarbonising our electricity grid, ending our reliance on gas, phasing out coal – why are we leaving ourselves with a big concrete and steel elephant in the room," Baker questioned.

"The construction industry is ready for it"

To address these emissions, he is proposing to make it a legal requirement for architects to "measure, report, and reduce" the embodied carbon emissions of major buildings projects.

If enacted, Baker said his bill could help the UK catch up to countries such as France, the Netherlands and the US, which are either moving to regulate embodied carbon or already have.

It would also bring government policy in line with what industry groups, including the Royal Institute of British Architects and the UK Green Buildings Council as well as the independent Climate Change Committee, have been demanding for a number of years.

"The bill calls for two things: first, whole-life carbon emissions to be reported on all major building projects; and second, for upfront embodied carbon limits to be set for those projects based on data from the first," Baker told Dezeen.

"I am convinced that the introduction of such regulation is feasible and that the construction industry is ready for it."

Bill was drafted based on industry insight

The Carbon Emissions (Buildings) Bill was written with support from industry group Part Z, which includes authors from the Royal Institute of British Architects and the Institution of Structural Engineers.

The working group drafted a proposal for how building regulations could be amended to account for embodied carbon in July of last year, in a move that has so far been supported by around 130 firms from Arup to Feilden Clegg Bradley Studio. 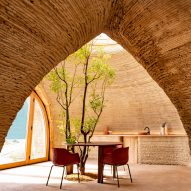 "It's really encouraging to see an MP backing this issue and proposing a bill to tackle it after the industry has been asking for it for so long," said Will Arnold, a Part Z co-author and head of climate action at the Institution of Structural Engineers.

"I think that's a really positive step in the right direction. You can see by the number of supporting statements on the Part Z website that there's a large part of the industry that would like to see the law change."

While waiting for government intervention, a number of companies, including engineering firm Buro Happold, have set their own embodied carbon targets. Others such as Feilden Clegg Bradley Studio have developed free, open-source calculators to help architects begin to measure the whole-life emissions of their projects.

The top image is by C Dustin via Unsplash.