Hidden within the hills of Bordeaux, France, the Le Dôme winery was designed to complement its rural vineyard surroundings.

Foster + Partners was commissioned for the project by Le Dôme owner Jonathan Maltus, who requested a "state of the art" wine production facility.

Maltus' other requirement was that the winery celebrated its site and proximity to the old town, which is a UNESCO World Heritage Site that dates back to the Roman era.

"When Jonathan Maltus first approached us, he expressed a desire to create a distinctive new winery, set against the unique backdrop of St Emilion," said the studio's founder Norman Foster.

"He wanted the building to be a celebration of the beautiful site, focussing on the views of the vineyard and making the landscape the primary protagonist in the design," he explained.

"The idea was to blend the building with its surroundings while creating a welcoming space for visitors and wine enthusiasts," Foster added.

Le Dôme winery sits at the end of a tree-lined avenue and is marked by a domed roof clad in recycled terracotta tiles.

Inside, it comprises two storeys, one of which is partially buried in the landscape to minimise the structure's overall visual impact.

The winery's lower floor is cast from concrete and clad in timber, while the upper level is lined with panoramic glazing that maximises views in and out of the building. 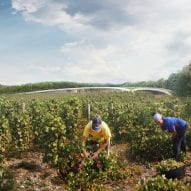 Foster + Partners designed a circular plan for the building, which incorporates two ramps – one positioned externally and one internally.

The ramps guide visitors up through the building, allowing them to observe different stages of the wine-making process, before reaching the upper level for a wine-tasting experience.

Described by the studio as the "social heart of the building", the upper level is complete with tables, a bar and entertainment spaces. Its glazed windows also grant visitors uninterrupted views of the vineyards and town beyond.

At the centre of the space is a circular atrium that allows people to look down into the wine production and storage spaces on the lower floor.

The upper floor is complete with a series of pared-back office pods for employees, which are enclosed by timber screens for acoustic and visual privacy.

These screens are complemented by the conch-like underside of the domed roof that is also crafted from timber.

The roof structure, which is 40 metres wide, was developed in-house by Foster + Partners' architectural and industrial design teams.

It makes use of a reciprocal frame – a type of self-supporting structure composed of sloping beams – which ensures the space is column-free.

The design of the twirling roof structure also gives rise to a six-metre-wide oculus at its centre, which floods the upper level with daylight.

Le Dôme was one of twelve buildings featured by Dezeen in its roundup of new buildings to look out for in 2021. Other recently completed projects on the list include a coastal library in China by MAD and SANAA's revival of the La Samaritaine department store in France.

Founded in 1967 by Norman Foster, Foster and Partners is an international architecture studio with headquarters in London. The studio previously designed a glass-fronted winery at the historic Château Margaux wine estate outside Bordeaux and a winery clad in weathering steel shingles in Spain.

In the UK, it is currently designing The Kentish Wine Vault, which will feature a green roof that extends up from the landscape to help disguise it.