News: an appeals court has blocked the SANAA-designed renovation of iconic former department store La Samaritaine in Paris, which includes a wavy glass facade that critics have compared to a shower curtain.

The court ruling effectively revokes part of the planning permission for the £368 million redevelopment planned by Japanese architect duo SANAA, causing building work to halt for the second time in a year. 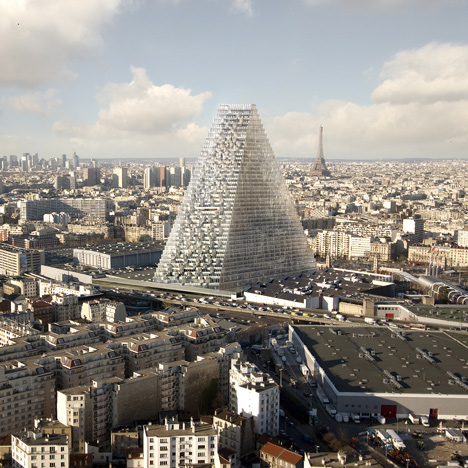 Commissioned by LVMH, the parent company of luxury brands including Louis Vuitton and Dior, the redevelopment involves a complete overhaul of the 19th-century department store that closed down in 2005 after nearly 40 years of decline, creating an all-new shopping centre.

SANAA architects Kazuyo Sejima and Ryue Nishizawa proposed demolishing several structures at the rear of the site and replacing the building's historic facades with a new transparent skin, which they described as "a set of etched glass waves".

Campaigners argued that the new structure wouldn't fit in with the area's 18th- and 19th-century Haussmann style and claimed the new facade would look like a shower curtain.

An earlier judge ruling in May 2014 briefly stopped work on the project, but it resumed later in the year. Two of three buildings on Rue de Rivoli were razed in this period, but the latest court decision has once again stopped construction.

The appeal is led by heritage groups the Society for the Protection of Landscapes and Aesthetics and SOS Paris, who have described the ruling as "wise and reasoned".

"Beyond the emblematic case of La Samaritaine, the issue is of the place of contemporary architecture in historic centres," said the two organisations in a statement. "The Parisians must now claim this victory as the result of a democratic struggle led by the associations."

LVMH – which is owned by France’s richest man, Bernard Arnault – told Reuters it would contest the decision at France's supreme administrative court. The Paris city council has also offered to support the cause.

SANAA first revealed its proposal for the Paris site in 2011. It includes 26,000 square metres of retail space spread over three floors, as well as social housing, a nursery, offices and a hotel.

It was originally expected to open in 2013 – a year ahead of the Frank Gehry-designed Fondation Louis Vuitton, also commissioned by LVMH – but is now unlikely to be completed before 2016.