Mcheileh Studio's proposal to build aeroponic farms in huge airships to distribute food around the globe has been awarded second place in Dezeen's Redesign the World competition powered by Twinmotion.

The proposal, called Aeroponic 2100, envisions dirigibles that fly through towns, cities and residential spaces distributing food where it is needed.

The ships would eliminate the need to transport food over long distances via carbon-intensive modes of transport and free up land currently used for farming.

They would also eliminate pollution and create a "true farm to table solution on a mass scale", according to Mcheileh Studio.

The airships would be climate controlled, self-sufficient, powered by solar and wind energy, and designed to travel anywhere in the world, including desert environments and natural or human-made disaster sites.

Redesign the World judges selected the entry as runner-up in the competition, which called for radical ideas to rethink planet Earth.

"People usually think of buildings as very fixed and permanent things, but they do not need to be," the judges said.

"Mcheileh Studio's dirigible architecture presents a compelling vision for a lighter, more mobile future where we can move our buildings to where they need to be without having to constantly build, destroy and rebuild permanent structures."

"One of the most significant challenges the human race faces this century is the production and distribution of food. Current methods produce high levels of air and land pollution through the growth, harvesting and transportation of food.

"Research has also demonstrated that agricultural land becomes degraded and less efficient over time due to the repeated use of pesticides.

"Additionally, food insecurity is reaching crisis levels in some parts of the world as a result of war, poverty and displacement of entire communities due to climate change. Aeroponic 2100 is a proposal that aims to address the problems around food production in the future by eliminating pollution, inefficient transportation and damage to land ecosystems - a true 'farm to table' solution on a mass scale.

"The concept is derived by combining aerospace technology and aeroponic farming methods. A fleet of airships contains agricultural space that is stacked vertically for the growth and harvesting of food. The airships are mobile food markets that also sell food. 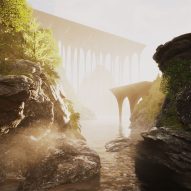 "They fly at slow speeds through cities and towns whilst connected to a central hub and detach and hover in locations connected to parks, residential areas and mass transit nodes. The interior also provides space for social gatherings, community events and recreational activities.

"Mobility is a key aspect of this concept. The ability of the airships to travel facilitates the distribution of food directly to where it's needed, thereby eliminating the requirement for large farms in the countryside and the transportation of food over long distances.

"Aeroponic 2100 can be deployed anywhere in the world, from large cities to remote, inhospitable desert environments. Their mobility offers the flexibility to bring food resources to areas affected by natural or man-made disasters such as war-torn regions or drought-affected land.

"The climate-controlled interior of the airships are independent of the external conditions, making them suitable to any location whilst simultaneously protecting crops from extreme weather events.

"Aeroponic 2100 is modular allowing scalability appropriate to the location. In urban areas where population levels are high, larger airships are deployed, whereas smaller satellite modules are distributed in vast rural areas.

"The airships are entirely self-sufficient, powered by solar energy that in the future has evolved to a level of efficiency that can power large aircraft and cities. Aeroponic and hydroponic farming have become preferred methods as they do not require soil. Rainwater is collected by the ship's outer frame, stored internally and filtered to feed plants.

"Water is also collected from seas and oceans and desalinated for use. The propulsion of the airships is powered by a combination of solar and wind energy.

"Solar energy is converted into heat that provides the gravitational lift required to fly the airship. Air compression is employed in the outer enclosure enabling lateral movement and manoeuvrability."