The next finalist project in Dezeen's Redesign the World competition powered by Twinmotion is Dennis Christian Schmidt's proposal to create a network of underground cities built around climate-regulating lakes.

Called Cave City, Schmidt's proposal is to create cities deep below the earth's surface in a bid to protect against climate change and natural disasters such as storms, tornadoes and increasing temperatures.

The proposed cities feature large residential quarters that take the form of colosseum-like structures built around lakes that help to regulate the climate inside the caves.

"Climate change and the resulting increase in natural disasters will force us to find alternative living spaces. Cities need to be protected from storms, tornadoes and rising heat.

"So how about creating cities underground rather than above ground?

"Cave City lies several dozen meters below the surface, protected from the hardships our future holds for us. 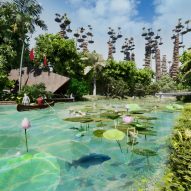 "The residential quarters are laid out like a colosseum around a lake. The lake helps to regulate the climate inside the cave and offers a range of leisure activities.

"Transport to and from the city is guaranteed via a subway system.

"A ventilation system in the ceiling of the cave is combined with a plant of vertical farms. A lot of crops need wind to develop tall, strong stalks, needed later when they are carrying heavy loads before harvest. Through this two birds can be killed with one stone."