Matthew Pratt's proposal to raise all human activities onto elevated cities built on slender stilts has been awarded joint third place in Dezeen's Redesign the World competition powered by Twinmotion.

Large, elevated planters are used to cultivate crops to facilitate a controlled supply of food whilst avoiding taking up large expanses of land.

Pratt describes the speculative proposal as an "alternative vision of humankind, with thriving communities elevated in beautiful landscapes".

Pratt's entry presents a "powerful and poetic" vision of the future

Pratt's entry has been named joint third place in the Redesign the World competition alongside Bless Yee's Carbon Capture Refuge X proposal, which imagines a world of floating habitats that capture carbon from the air.

"Pratt's Higher Ground was one of the most visually stunning entries that we saw," said the Redesign the World judges.

"Rather than simply proposing an elevated city for people to live in, separated from the natural world, his project presents a vision of humanity living in close harmony with nature, which is both powerful and poetic."

"The history of human evolution changed its course when our primate ancestors came down from the trees to live and hunt on the open plains. These early humans then began to domesticate various plants and animals, kickstarting the change from a lifestyle of hunting and gathering to one of agriculture and settlement.

"This speculative proposal considers: what if we had never left the trees? What if instead of damaging and destroying precious areas of land, we had left the earth's surface untouched, and instead built high above the ground? What if communities could thrive elevated above sacred landscapes, akin to our treetop dwelling ancestors?

"In this vision, all human activity takes place high above the land, amongst the canopy of the trees. 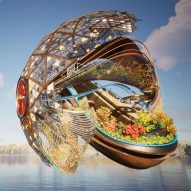 "Taking direct reference from nature, an organic architectural language evolves, one that works in harmony with this natural order.

"Connections with the ground are made lightly on slender columns, blending in with the trunks of the trees. This ensures minimal impact is made to the ground, resulting in dramatic elegant forms floating towards the clouds.

"Much like our crops and horticultural flowers, trees are selectively bred over many years, optimising their height and strength, and shaped over time, to serve as an organic material alternative to steel and concrete.

"Water, seen as the most precious resource, is designed to be stored in these towering structures. At these great heights, the stored water has potential energy, for use in the generation of power as well as hydroponic systems for plants. 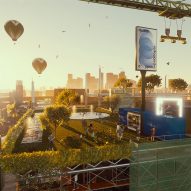 "Agriculture is limited to the cultivation of crops, all of which takes place in large elevated planters. This eliminates the significant impact agriculture has on large areas of the land and ensures a controlled supply of food.

"A profound respect and religious worship of the natural order takes precedence over any other god or religious deity, thus ensuring a constant level of care and devotion to the environment; seeing it as a duty to act as guardians of the Earth's flora and fauna.

"This resulting proposal offers an alternative vision of humankind, with thriving communities elevated in beautiful landscapes, working with the forces of nature, to ensure a long and lasting environment on Earth."