Only one of the 20 projects longlisted for the RIBA House of the Year 2021 achieved an A-rated energy performance certificate according to research by British studio Hawkes Architecture.

The research revealed that nine of 20 longlisted projects received a B-rated energy performance certificate (EPC), while the remaining projects were C, D and E-rated.

An EPC is a measure of the overall efficiency of a home, for which the best rating is A and the worst is E. Hawkes Architecture used the latest available EPC data available for the projects to conduct the research.

The only longlisted project to receive an A-rated EPC was the Devon Passivhaus, a low-lying brick home in Devon by McLean Quinlan that performs to the highly energy-efficient Passivhaus standard.

Four of the longlisted projects, Grain House by Hayhurst & Co Architects, Kyle House by GRAS, Simple House by Haysom Ward Miller Architects and The Old School by ArkleBoyce Architects did not have publicly accessible EPC data.

"The findings arising from the research have been more profound than even we thought," said the studio's founder ​​Richard Hawkes.

"My hope is that it might help shift the focus onto sustainability in a more meaningful and substantial way than has been the case thus far," he told Dezeen.

RIBA House of the Year 2021 is an annual award bestowed by the Royal Institute of British Architects (RIBA) to the best one-off house designed by an architect in the UK.

It will be picked from a shortlist of seven projects, which have been narrowed down from a longlist of 20 during the same programme over the last four weeks.

The shortlisted projects so far include House for Theo and Oskar by Tigg+Coll Architects, House in Assynt by Mary Arnold-Forster Architects, Windward House by Alison Brooks Architects.

Slot House by Sandy Rendel Architects with Sally Rendel, Redhill Barn by TYPE and Water Tower by Tonkin Liu have also been shortlisted. The final shortlisted project will be also revealed during the final episode of Channel 4's Grand Designs: House of the Year.

The lowest scoring house on the longlist was House for Theo, which achieved an E-rated certificate. However, since revealing the research Hawkes Architecture, has been informed that the EPC for this house renovation has not been updated since Tigg & Coll's intervention and was for the existing dwelling.

Energy performance likely to "lag by some years"

This year's judging panel was chaired by Amin Taha of Groupwork and also included Cany Ash of Ash Sakula Architects and Kieran McGonigle of McGonigle McGrath.

In response to the research, Taha told the Architects' Journal that it is "unfair to judge designs conceived more than a decade ago by today's expectations" because "EPC modelling by M&E consultants at that time will have been a fair approximation". 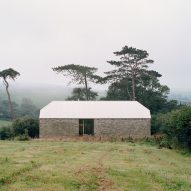 For the same reason, Taha added that there is "still likely to be a lag by some years" in terms of energy performance in future competitions.

Hawkes told Dezeen he "was extremely disappointed by the defensiveness and lack of accountability expressed" by Taha.

"With such indifference at the helm of the RIBA awards process, what hope is there for seeing the rapid change demanded by the RIBA 2030 challenge?" he asked.

In response to the research, the chair of the RIBA Awards Group Denise Bennetts said that "there has long been a sustainability requirement" for all of RIBA's award programmes and that all entries undergo "rigorous assessment and interrogation".

"To establish more clarity and consistency in our assessment, as well as alignment with the RIBA's 2030 Climate Challenge, our updated entry requirements are even clearer about how projects should demonstrate their credentials on elements such as energy in use, embodied carbon and water use," Bennetts added.

Last year, the RIBA House of the Year competition was among the RIBA Awards programmes to be cancelled due to the coronavirus. The previous winner in 2019 was House Lessans by McGonigle McGrath, which was celebrated as a "dream home" built on the "tightest of budgets".

The main image is of the Devon Passivhaus taken by Jim Stephenson.