An exhibition highlighting a new generation of Chinese architects who prioritise social, cultural and environmental sustainability in their work is currently on display at the Museum of Modern Art in New York.

Named Reuse, Renew, Recycle: Recent Architecture from China, the exhibition was curated by the Museum of Modern Art (MoMA) to spotlight emerging and "resource-conscious" architects in the country.

It features a total of eight projects by seven architecture studios, presented through a mix of models, drawings, photographs and videos.

"Our aspiration with this exhibition is twofold," said MoMA curators Martino Stierli and Evangelos Kotsioris.

"On the one hand, to shed light on the practice of a young generation of Chinese architects, whose remarkable and innovative work is still little known in the West; and on the other, to discuss their work as a progressive blueprint for a less extractive, more resource-conscious future for architectural practice across other parts of the world," the pair told Dezeen.

According to the curators, the exhibition also illustrates the country's move away from creating "urban megaprojects and spectacular architectural objects".

This is because the new generation of Chinese architects champions smaller-scale interventions that are more sensitive to the existing built environment, they said.

"China's unparalleled economic and societal transformation of the past three decades has been accompanied by an unprecedented building boom that made the country the largest construction site in history," Stierli and Kotsioris explained.

"Recently, however, a rethinking has begun, driven by a younger generation of architects who are working independently from state-run design institutes. Their varied practices are marked by a general skepticism toward the tabula rasa approach." 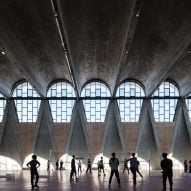 While the architects do not identify as a group themselves, the curators said that they share a common interest in the reuse of existing structures, renewing neighbourhoods and infrastructure, and recycling building materials within China.

"A connecting thread clearly runs through their practice and continued investment in an architecture that is at once contemporary, yet rooted in the specificity of the culture and context of China," the curators explained.

"These eight projects challenge Western understandings of sustainability, which is often characterised by a very technocratic approach to building practice and a neglect for the human and social dimension architecture plays."

Read on for the eight projects featured in Reuse, Renew, Recycle: Recent Architecture:

Chi She Gallery by Archi-Union Architects

The three-dimensional geometry of this new masonry wall was designed on the computer and fabricated on-site using a mobile robotic system.

Micro-Hutong was the result of a research project exploring ways to salvage and revive Beijing's hutongs – alleys formed by rows of traditional courtyard houses that have been a target of mass demolition in the city.

ZAO/standardarchitecture transformed a 35-square-metre hutong into a guest house by inserting a series of independent living units, arranged as inward-looking overhanging volumes. At the centre is an irregularly-shaped courtyard that can be used as a shared gathering space.

The grey tone of the guest house was achieved by mixing concrete with Chinese ink and is a reference to the traditional grey bricks of the hutong.

Bamboo Theatre by DnA_Design and Architecture

The Bamboo Theatre is a performance stage that was created near the village of HengKeng by bending and roping up bamboo in a circular arrangement to form a domed canopy.

It forms part of DnA_Design and Architecture founder Xu Tiantian's long-term rural revitalisation program in the mountainous Songyang County, for which she has designed dozens of reversible architectural interventions that she calls "architectural acupuncture".

This museum was built at a former wharf used for coal transportation in Shanghai. Atelier Deshaus' design combines both old and new architectural elements that all celebrate the site's industrial past.

Among the original elements preserved on the site is a coal-hopper unloading bridge built in the 1950s, which is now used as an open-air covered space, as well as a defunct two-story garage that has been repurposed as a subterranean exhibition space.

Embedded in one of the park's slopes, the slanted pavilion is intended to resemble traditional Chinese inkstones that are used to mix dry ink and water in art and calligraphy. It is clad in a series of hand-made ceramic tiles.

Another Amateur Architecture Studio project on show is its regeneration of Wencun Village, which involved renovating existing houses and designing thirty new residences informed by the traditional courtyard structures in the region.

The studio hopes its approach will serve as a prototype for renewing other villages in China.

Designed by Studio Zhu-Pei, this museum occupies a site in the historic centre of Jingdezhen, which is widely known as China's "porcelain capital".

It comprises a series of vaulted structures made from a mix of newly-fired red brick and others salvaged from old furnaces. These vaulted structures house the museum's collections and reference the forms of traditional brick kilns, many of which are still found nearby.

The industrial facilities of an abandoned sugar mill from the 1960s were converted to create this hotel near the city of Guilin.

Reuse, Renew, Recycle: Recent Architecture from China is on show until 4 July 2022 at the Museum of Modern Art in New York. For details of more architecture and design events, visit Dezeen Events Guide.