Chinese architect Zhang Ke has slotted a hostel into one of Beijing's ancient hutong neighbourhoods, featuring tiny rooms that project at angles into a central courtyard.

Ke and his Beijing studio ZAO/standardarchitecture created the 30-square-metre hostel as part of its ongoing Micro Hutong Renewal project.

The aim of this project is to highlight the potential in these traditional courtyard neighbourhoods – which are largely unique to the Chinese capital, but are gradually being demolished.

It was important to the team that the project be sympathetic to the mismatched materiality of the ageing hutong, so they added a series of staggered rooms with a rough, irregular concrete finish.

"The goal of this project – a 30 square metre hostel – is to search for possibilities of creating ultra-small scale social housing within the limitations of super-tight traditional hutong of Beijing" they explained.

The hostel is constructed from concrete mixed with Chinese ink, which was poured in-situ and cast against wooden boards. These rough concrete surfaces are left exposed internally, and paired with matching wooden flooring.

On the ground floor, rooms include kitchen and dining space, two bathrooms, and two connecting corridors.

Ladders leads upstairs, rather than space-hungry staircases. This upper level, contains a bedroom, a study and teahouse, and a terrace.

These rooms are arranged so that they project out in a variety of angles into the courtyard, helping to bring in light and prevent the interiors feeling too cramped.

"Apart from enhancing the flow of air and light, the courtyard creates a direct relationship between the living space contained in the dynamic volumes and an urban vestibule in the front part of the building," said the team.

Each room boasts a floor-to-ceiling window that faces onto the courtyard. In the ground floor rooms, these double as doors.

A multifunctional living space at the front of the hutong acts as a barrier between the private rooms and the street.

This room is available for use by the hostel residents as well as members of the public. It is lined in a mix of wooden and metal boards that form shutters over the windows, and has an internally exposed timber framework.

To bring the property in line with modern living standards, ZAO/standardarchitecture incorporated a central air conditioning system and underfloor heating.

There are also three openable skylights that allow air to circulate throughout the hostel.

But they aren't the only architects working to transform Beijing's hutongs. People's Architecture Office used prefabricated panels to create a contemporary, light-filled hutong house, while Space Modification Unit transformed an old property into a tea house.

Photography is by Wu Qingshan unless otherwise stated. 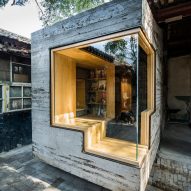