Chinese Brutalism Today was curated by architect Bologna to offer a snapshot of the last two decades of architecture in the country, during which it has become the world's largest concrete consumer.

The book identifies the reasons, cultures and attitudes behind the concrete architecture trend, through the analysis of buildings by notable Chinese architects, such as Amateur Architecture Studio.

According to Bologna, who is also an assistant professor at Politecnico di Torino in Italy, the intention is to document the trend because he believes its longevity is so unusual.

"However concrete architecture in China is a very singular phenomena," he explained. "Phenomena in China normally come and go very fast. My book is a snapshot of the current architectural situation."

Chinese Brutalism Today, published by ORO Editions, is divided into three chapters that explore use of concrete from the design process through to a finished structure. This is conducted through the analysis of a small selection of concrete buildings he deems to be the most pertinent.

It was developed from research carried out by Bologna through photographic surveys and interviews with Chinese architecture studios while he was living and working in the country.

"I only analysed the apex of a pyramid, I analysed a very few chosen buildings," Bologna explained.

"I choose the case studies that are representative and interesting. The aim wasn't to do a comprehensive catalogue, but the aim was to give a critical reading and to extract some design tools from this architecture." 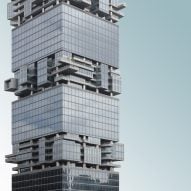 Bologna's main discovery from carrying out the research was that concrete is predominantly used for ornamental purposes in Chinese architecture, and helps architects to articulate their own distinctive cultural identity.

He describes this as a "regional evolution", noting that ornament and concrete finishes that distinguish many Chinese buildings develop in relation to the skills of local construction workers.

"There is a strong identity intention throughout this architecture," Bologna explained. "This is something that is not so clear when you just take a look at pictures."

"Chinese architects now are talking to the world through their architecture."

Read on for Bologna's pick of the most significant buildings in Chinese Brutalism Today:

"If you look at this building, you can see shapes that are obtained through use of a wooden formwork. Wooden formwork costs a lot everywhere in the world because of labour required to assemble it.

"Therefore the westernised world has lost a lot of architectural shapes and structural systems, because they can only be generated by the use of this particular formwork. In China, it's something that will disappear in a few years too. Wooden formwork made it possible to obtain such a building."

"The Ningbo History Museum is a masterpiece in terms of ornament. The protagonist is this joint in this photo, which I describe in the book.

"The joint is a tectonic and drawing exercise at the same time – the surfaces combine concrete and a type of masonry called wapan that uses recycled building materials."

"The Luyeyuan Ston Sculpture Art Museum is a real milestone because Jiakun Architects used concrete specifically on the surface. The structure is in masonry, covered by a layer of concrete.

"In this way, [the studio] hasn't had to use spacers inside the formwork. Instead it focuses on the surface and on the spiritual quality of this space generated by the light."

"The Memorial Hall of Long March of the Red Army in Sichuan is very interesting because of the architectural shape of some of its elements.

"This mainly includes the columns on the ground floor, and also some of the surfaces which used particular formwork done by bamboo canes."

"Seashore Library is a well known building in the West. It is fundamental to understand why it was built like this in terms of space and relationship with light and the surfaces.

"I have published, for the first time, photos of the building site that revealed the attention on the building's formwork that enhanced its imperfect surfaces. [The studio] knew that it was impossible to obtain a perfect surface."

"It has a very deliberately rough surface, and it also reveals the complexity of its formwork. The local construction workers were very, very good to produce this type of wooden formwork."

"Atelier Deshaus took confidence in the fact it was impossible to obtain a perfect surface in the area.

"Atelier Deshaus chose to work with deliberately rough surfaces and – even if though they are very rough and uncontrolled surfaces – the results is much better than its Long Museum in which it tried to create a smooth polished surface that was not possible with the capabilities of the local construction industry."

"Peachblossom Valley Tourist Center is important because it uses the bush hammered technique to correct some mistakes in its surface.

"Bush hammering has become a real ornamental tool in Chinese architecture to correct some mistakes and some casting mistakes."

"Mu Xin Art Museum – the concrete there is perfect. It is the perfect example of what is possible to obtain in China in terms of the execution with a Chinese construction company, thanks to the ability of the designer."

"In my opinion it is a masterpiece in terms of the conception of the space and also how it obtains these very peculiar surfaces."

"This building reveals brilliant design in layout of a space, shaped by the use of exposed concrete.

"The particular shape of the building, the result of a careful layout of the various functions, creates spaces with quality and perception that does not seem to be influenced by a poorly controlled finish of the exposed-concrete surfaces."