Bryan O'Sullivan Studio has conceived the interior of The Red Room bar in Mayfair's The Connaught hotel to feature artworks by female artists including Louise Bourgeois and Jenny Holzer among an eclectic mix of furnishings.

Tucked behind a velvet-curtained doorway, The Red Room is the first bar to open in The Connaught in more than a decade and serves a selection of wines from the hotel's 30,000-bottle cellar.

The bar's name is a nod to the artworks on its walls, all of which feature a touch of crimson.

Among them are two pieces from renowned French-American artist Louise Bourgeois: a word art piece called I Am Rouge and an untitled hologram that depicts a surreal scene of a miniature chair housed in a bell jar.

Also represented are Vietnamese artist Tia-Thuy Nguyen, photographer Trina McKille and conceptual artist Jenny Holzer. The only artwork in the bar that wasn't created by a woman is a pair of arched stained-glass panels by British painter Brian Clarke.

"When designing the space, we envisioned an eclectic art collector's home," the Shoreditch-based studio explained. "It's a space that feels elevated yet utterly relaxed."

One end of the space is dominated by an Italian marble fireplace with red veining. Bourgeois' I Am Rouge is mounted directly above, flanked by Brian Clarke's glass panels.

Beyond lies a series of seating areas dressed with a medley of furnishings, from striped armchairs and bijou lamps to floral rugs and curvy sofas. 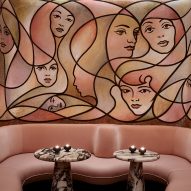 A partition wall with organically shaped openings is used to display a range of ceramics and objets d'art, which will be rotated on a regular basis.

Along with other surfaces throughout the bar, this wall has been rendered in a pale pinkish hue in order to let the red artworks come to the fore.

A walkway with a terrazzo finish leads up to the bar counter, where guests are able to sample the red wine menu as well as a roster of seasonal wine-based cocktails.

The counter's top is crafted from rose-coloured onyx while mottled glass was used to make the decorative gantry that hangs overhead.

Since then, he has designed a number of hotel bars including The Painters Room at Claridge's and The Berkeley Bar & Terrace in Knightsbridge, which features a cosy, blush-pink snug where small groups of guests can retire with their drinks.

All the photography is by James McDonald except the top image by Justin De Souza.