An agave plant fibre used to produce coffee bags could be repurposed in the furniture industry, according to Design Academy Eindhoven graduate Rosana Escobar.

Fique is primarily turned into coffee bags to be exported from Colombia all around the world, but Escobar believes the material is not being used to its full potential.

By identifying "missed opportunities" in the production process, the designer has found sources of waste fique fibres, which she believes could be used for crafting furniture and textiles.

To demonstrate this, she has used the material to create a bench, stool and rug.

"This is a huge industry that completely relies on another industry – it relies on the industry of coffee – and this makes this material very vulnerable," Escobar explains in a video.

"I wanted to give a voice to this material, to produce new products that could give new narratives and could make us connect with the fibre differently," she said.

Escobar developed the project, titled Unravelling the Coffee Bag, for the bachelor degree programme at Design Academy Eindhoven (DAE) in the Netherlands. 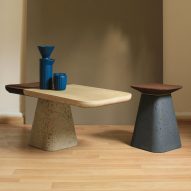 Originally from Bogotá, the designer wanted to look more closely at a material that is embedded in Colombia's history, but which has become increasingly mono-functional.

She felt it was important to develop ideas that fit into the material's existing lifecycle, rather than place more demand on an already strained farming industry.

To do this, she investigated each stage in the fibres' journey from plant to product.

"In all these different stages I found opportunities where waste is produced and discarded," she said.

The first opportunity takes place when the fique fibres are harvested. As the material is combed, it creates a "kind of fluff" byproduct, which Escobar has turned into felt.

The designer also discovered that coffee bags are largely disposed of after use. She proposes unravelling the woven fabric to create hair-like fibres.

Escobar used the felt to create her rug, while her bench and stool are made from the recycled yarns.

These designs were developed in collaboration with local fique producers, building on their existing craft techniques.

"I think it is necessary for new products to come out of this industry and to be produced locally," Escobar told Dezeen. "Because if raw materials are exported, to be processed elsewhere, the value is only gain on the other end."

Escobar presented her project during Dutch Design Week in October, both at the DAE graduate show and as part of the Antenna graduate showcase organised by Design Indaba.

Other DAE bachelor degree projects completed this year include a DIY repair system, a device for turning human breath into clouds and furniture that charts a history of homosexuality.