More than 100 artisans are united in a directory of Valencia's historic ceramics community, which has been compiled by potter Ana Illueca to make the region's craft skills more "visible internationally and accessible locally".

Funded as part of Valencia's designation as World Design Captial for 2022, the Ceramic DNA search engine allows prospective customers and collaborators to find ceramicists in their area based on location and specialisation.

According to Illueca, the project represents the first attempt to map the enduring expertise of the local ceramics community, which has existed for centuries.

"The oldest ceramic fragments found in the area date from 7,000 years ago," she told Dezeen.

"Valencia has four ceramic schools and seven ceramic museums. We have the know-how, the suppliers, the raw materials, the industry, the crafts and we have the ceramic talent," she added.

"The map will help make professionals visible internationally and accessible locally. It will help share knowledge amongst ceramicists and with society in general."

The 106 potters highlighted in the directory hail from all three Valencian provinces and were chosen from 153 applicants by an expert committee led by Jaume Coll Conesa, the director of Spain's National Ceramics Museum.

The aim is to highlight ceramicists who are preserving local cultural heritage and ultimately facilitate their collaboration with industry, designers and brands.

This is particularly important, Illueca argued, because crafts and ceramics are rarely recognised as drivers of social and economic value, and thus often lack institutional support and funding within the EU. 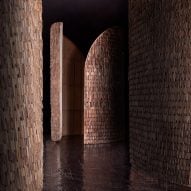 "According to a report from the economics school at the University of Valencia, ceramic crafts is one of the sectors that, at a small scale, can be part of the long-awaited shift of the Valencian production model towards activities based on culture and creativity," she explained.

"It can help improve our levels of productivity and have positive impacts not only on economic regeneration but also on the levels of health and wellbeing of the population and on social cohesion and community participation."

As part of the World Design Capital programme, Ceramic DNA will hold a group exhibition in Valencia in 2022, as well as presenting work at Maison&Objet in Paris.

In the lead-up to the year-long initiative, a modular pavilion by MUT Design clad in thousands of reclaimed wooden scales travelled around Spain to showcase work from 50 Valencian designers.