MUT Design has clad five modular pavilions in scales made from leftover wood for a travelling exhibition to celebrate Valencia's title of World Design Capital for 2022.

The pavilions will showcase work by 50 designers in five different sections – design and art, the circular economy, industry and craftsmanship, technology and the transformative economy.

Each section is housed within its own mini pavilion formed from two semi-cylinders.

These consist of four metre-high curved walls, which can be placed separately or together to create a labyrinth of winding corridors and secluded alcoves.

Inside, the units' pinewood frame and construction are laid bare, while the convex exterior is clad in hundreds of small, overlapping wooden fins, adding up to around 220,000 across all five pavilions.

The wood was originally meant to be turned into the parade floats that are ceremonially burned as part of Valencia's historic Fallas festival every March, but the event was cancelled due to the coronavirus outbreak.

Instead, the wood was used for this installation, which is on view as part of the Madrid Design Festival until 14 March before becoming a travelling exhibition.

"Here in Valencia, we have a lot of traditional wood ateliers that create works for the Fallas festival," MUT Design co-founder Alberto Sánchez told Dezeen.

"But it was cancelled due to the pandemic and a lot of materials were left on the shelf. So we decided to collaborate with one of the ateliers to give a new life to the wood and create some work for the builders."

Each scale was handmade by local woodworker Manolo García and trimmed to three standard sizes of 14, 16 and 18 centimetres. These were then lined up and alternated to create a textured surface not dissimilar to tree bark.

"We wanted to bring together tradition and the avant-garde while recovering something that is really ours – deeply rooted in our city," Sánchez explained.

In particular, the studio drew on natural textures found in the Albufera National Park just south of Valencia, as well as on the thatched roofs of traditional houses known as barracas. 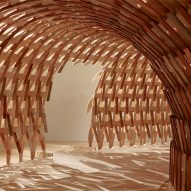 Breaking each pavilion down into two semi-cylinders allows the individual units to be combined into "infinite compositions" that can be adapted to different spaces for the travelling exhibition.

"Because it is a travelling exhibition, we want to create one-of-a-kind experiences in each of the several places it will be visiting," Sánchez added.

The units were also designed to be taken apart into separate pieces, which can be stacked for ease of transport.

Contributors to the exhibition include designer Jaime Hayon, brands Andreu World and Expormim, and a number of emerging studios showing projects including self-ventilating graphene facades and homeware made from olive pits.

"We wanted to bring to Madrid a different selection of projects that are leading a silent transformation of society," explained Xavi Calvo, director of World Design Capital Valencia 2022.

MUT Design has previously collaborated with Expormim to create a chair modelled on the shape of a flower petal and an outdoor rug made from braided ropes, which were exhibited at the products fair of Dezeen's Virtual Design Festival.

Photography is by Ernesto Sampons.

Valencia Pavilion – The Future is Design is on view at the Fernán Gómez Cultural Centre as part of the Madrid Design Festival until 14 March 2021. See Dezeen Events Guide for an up-to-date list of architecture and design events taking place around the world.