Argentinian office Set Ideas has added a glass-and-steel extension to a house in the mountains of Córdoba, using a modular structure to enlarge the resident's living spaces.

Completed earlier in 2021, the project is dubbed Fluid House, and entailed a thorough remodel of an existing home in the central province of Argentina.

Set Ideas, an office that is based in Córdoba's Villa Allende, employed its signature modular steel system to create new living spaces within the home.

"We took advantage of the spectacular vistas and the original layout of the house to generate a modular metal structure," Set Ideas explained.

The intervention is first seen from the street, where a new gate provides more privacy for the home's residents.

Black metal pickets now front the building, giving only glimpses of the residence beyond. Behind these, the architects laid out a new outdoor lounge area, with a fireplace and grill.

To the home itself, Set Ideas added a four-storey volume that is attached to the existing stone structure. Because of the site's steep slope, this addition meets the scale of the current property.

"We re-evaluated the functionality of the house on each of the existing levels, giving precedence and visual importance to what was previously built," said Set Ideas.

"We designed and built everything in metal on the house, to make old and new as one complete project," the studio told Dezeen.

The extension itself is made of black steel structural supports and windows, complemented with plywood panels that form guardrails and ceilings. 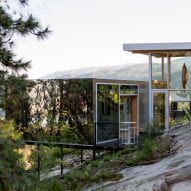 On the ground floor, the architects included a new living room, which enjoys sweeping views of the lush surroundings and is connected to a dine-in kitchen below by an open staircase.

"With few but significant elements, we managed to make the space flow through a modular structure," said Set Ideas.

Set Ideas also used the intervention as an opportunity to create a new storage room in the cellar, as well as a small home office perched on the top floor. In total, the new floor area encompasses 130 square metres.

Technical improvements were also made to the existing structure, including new windows throughout the home, and a refurbishment of the existing masonry facade.

Other projects in Córdoba include a residence that Argentinian studio Nanzer + Vitas designed to resemble a ruined medieval village using local stones cast into concrete formwork, and a home that architect Edgardo Marveggio designed for his ex-wife that features intricate textures on its walls.