Hospitality brand Room2 has opened what it claims is the first hotel to reach net-zero emissions across its entire lifespan from construction to demolition.

Designed by architecture studio Project Orange, the new build is located in the west London area of Chiswick and features 86 rooms powered by solar panels and ground source heat pumps, with interior fit-outs made locally from FSC-certified timber.

The project follows a recent pledge that the Lamington Group, which owns Room2, will only construct and operate net-zero carbon buildings by 2030.

The Chiswick outpost is the debut hotel to be completed as part of this decarbonisation strategy, which the company describes as an "industry first".

Room2 says it worked to reduce both the hotel's operational and embodied emissions, ultimately amounting to an estimated carbon footprint of 10,800 tonnes over the building's 60-year lifespan.

These emissions were offset by investing in a verified bamboo afforestation programme in Nicaragua, which Room2 says makes the project the "world's first whole-life net-zero hotel".

Architects not involved in final calculations

However, Project Orange partner James Soane told Dezeen that his firm was not consulted on the final whole-life carbon assessment for the "allegedly" net-zero building.

"I'm going to be quite honest with you, I haven't seen the final calculations because we weren't involved in the interior fit-out," he said.

According to Soane, when the building was designed in 2016, it was only meant to achieve the second-best BREEAM rating of "excellent" rather than aiming for net-zero from the get-go.

Consequently, the final design focuses much more heavily on operational emissions than on the embodied carbon footprint from materials and construction.

Thorough insulation, energy-efficient appliances and lighting activated by motion sensors allow the building to use 89 per cent less energy per square metre than a typical UK hotel.

And all of the energy needed for heating and cooling is provided by the hotel's own rooftop photovoltaics as well as the heat pumps that were tunnelled into the ground below the building to draw warmth from the earth into the interior.

But embodied carbon reductions were only prioritised once the building was nearing completion, by using reclaimed and recycled materials across furniture, equipment and finishes "when possible" and making freestanding furnishings from certified wood within a ten-mile radius of the hotel. 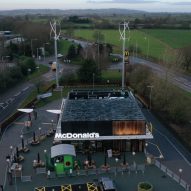 As a result, the final building has an embodied carbon footprint of 765 kilograms per square metre, which is significantly above the 500-kilogram target that Room2 is setting for its future projects.

"Moving forward, new buildings will be assessed before construction and the process will look to reduce embodied carbon throughout the building's design stages," said Room2's sustainability manager Chantal Beaudoin.

"For example, Room2 Belfast will be using GGBS [ground granulated blast furnace slag] as a low-carbon cement alternative and its upfront embodied carbon is estimated to be 582 kilograms of CO2e per square metre, getting us closer to our overall target."

Ultimately, the Chiswick hotel cannot be considered net-zero in the strictest sense, as its embodied emissions were not reduced from the start and to the maximum extent.

In addition, its carbon calculations do not take into account so-called scope 3 emissions from guest travel, which at 1,672 tons account for nearly half of the Lamington Group's annual carbon footprint.

The company has not set any concrete reduction goals related to travel emissions and is instead placing responsibility onto visitors themselves.

"We believe to be the first hotel chain to track and report on guests' travel to our properties," Beaudoin said.

"We are encouraging guests to consider sustainable travel options and are working towards offering our guests the opportunity to offset their travel emissions starting in 2022."

According to the definition set out as part of the UN's Race to Zero campaign, reaching net-zero requires reducing emissions to the lowest possible level before reaching for offsets in the form of carbon removal schemes.

This involves tackling all three emissions scopes, including scope 1 and 2 emissions generated by a company itself and its purchased electricity, steam and heat, as well as indirect scope 3 emissions caused by customers when purchasing its goods or services.

A growing number of companies have committed themselves to reaching net-zero in line with the targets set out in the Paris Climate Agreement, including Dezeen alongside furnituremaker Takt and refillable cosmetics company Forgo.

McDonald's, which is aiming to reach net-zero by 2050, announced earlier this month that it had completed the "UK's first net-zero restaurant" but failed to take into account the consumption-based emissions associated with its beef-heavy menu.