British architecture firm Adjaye Associates has designed a collection of pigmented-concrete pavilions in Winter Park, Florida, to house a library and an events centre.

Located on the northwestern corner of the 23-acre (9.3 hectares) Martin Luther King, Jr. Park in Florida, the Winter Park Library and Events Center comprises three pavilions and was described as a "micro-village" by Adjaye Associates.

The culture hub, which replaced an existing civic centre, was developed as part of an extensive revitalisation of the park and first announced in 2017.

The pavilions were designed as square and rectangular buildings with exterior walls that are angled inwards at their base. Large vaulted arches on the sides of the buildings provide views from the interior across to the parkland.

Materials used were locally sourced, with the precast concrete used across the facade sourced from within 25 miles of the site.

The project's design also references its surroundings, with the vaulted arches informed by the park's plant life and local architecture.

"Arches, inspired both by local fauna and the region's vernacular architecture, establish the form of the pavilions, with vaulted rooflines and sweeping windows creating a porous relationship between interior and exterior, drawing natural light deep into the buildings," said Adjaye Associates.

The two-storey library houses collection spaces, a computer lab, an indoor auditorium, a recording studio and youth spaces. It has an open-plan design to aid accessibility throughout and four timber-lined cores that hold archival collections, reading rooms and support zones.

The events centre contains a rooftop terrace and a large auditorium surrounded by flexible open spaces, as well as an amphitheatre and a rooftop meeting room. 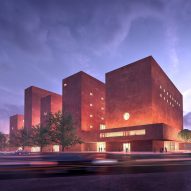 Dramatic black-painted spiral staircases sit at the centre of each structure, contrasting against red-painted walls and connecting the upper levels of the buildings.

Rose-pigmented concrete covers the ceiling above the event centre and the library's mezzanine-style second floor, tying the interior of the buildings together with the exterior walls.

The event centre rooftop terrace overlooks the park, as well as a nearby lake and the concrete embossed roofline of the adjacent library and Porte Cochère.

"As an ensemble, the Winter Park Library and Events Center comes together as a space of social gathering, intellectual nourishment, and enhanced connection to its natural tropical context," the practice said.

The Porte Cochère pavilion is situated beside the events centre and library and has the same rose-pigmented concrete material palette and a similar tapered, square form.

Unlike the library and events spaces, however, the pavilion has no glazing between its vaulted arches. Instead, it functions as an open canopy under which visitors can rest. A large circular opening pierces the roof of the pavilion, adding a sculptural quality.

The structures were designed with large overhangs to ensure visitors are given shade from the Florida sun, while an on-site solar energy system is projected to produce around 37,865-kilowatt-hours of energy annually.

The project also has a stormwater irrigation system that lets the stormwater filter through its parking lot structure, before being collected in a nearby lake and reused to water the landscape around the buildings.

Other red-hued projects by Adjaye Associates include the proposed campus for The Africa Institute in downtown Sharjah, UAE, and eight rammed-earth domes that the practice designed for the Thabo Mbeki Presidential Library in South Africa.

Photography is by Dror Baldinger unless stated otherwise. The top image is by Ivane Katamashvili.