American studio PARA Project has designed a wooden pavilion on a canal in Bruges, Belgium, to be an uncanny "doppelgänger" of an adjacent 15th-century canal house.

The pavilion, called Bruges Diptych, was designed as an events space for the 2021 Bruges Triennial, which for its third edition invited responses to the curatorial theme of "TraumA".

According to its curators, this was an exploration of the "hidden spaces" that reveal the reality of life behind the outward image of the city's famous medieval centre, which is a UNESCO World Heritage Site.

"What is going on behind those stately facades?" asked the Biennial's curatorial statement. "How is the 'medieval city' actually being experienced and lived in?"

PARA responded by designing a pavilion with a form that, from a distance, appears to mimic the form and scale of the neighbouring medieval canal houses.

On closer inspection, the pavilion is split into two intersecting forms that give the illusion of being pulled apart, a conceptual response to the idea of "revealing" what lies behind the city's facades.

"The Diptych serves as an event space for the Triennale's programming, addressing issues in urban trauma, and was one of several international commissions open within the city through late fall [2021]," said the practice.

"Its brief proximity with the canal house is a study in formal estrangements," it continued. "Still, through orientation, material, scale, posture, the pavilion recognised something of itself in its new neighbour."

Due to the site's heritage status, the pavilion floats atop 15 connected pontoons in the canal to avoid any impact on the existing buildings, with just a slim gap between it and the adjacent canal house.

It was built from a timber frame structure, which has been left exposed internally to reveal where the roof beams of the pavilion's two gabled forms intersect. 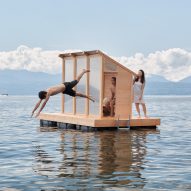 Large openings at one end of this timber structure frame the facade of the historic canal building, and small projecting areas on either side create spaces for looking out over the canal.

Externally, the timber frame is partially clad with plywood panels, and features on the neighbouring canal house such as the gabled dormer windows and other openings have been left as geometric outlines.

This creates the illusion that the Bruges Diptych is a doppelgänger, a double, of the existing buildings.

Thin mirrors installed on the interior columns add to the surreal feel of the pavilion, reflecting fragments of the historic surroundings through the space.

PARA Project was founded by Jon Lott in 2007 and has offices in New York and Cambridge, Massachusetts. Lott is also a cofounding member of Collective-LOK, with which his previous projects include a flexible home for the Val Alen Institute in New York.

The photography is by Stijn Bollaert unless otherwise stated.