Researchers at ETH Zurich have used 3D-printed formwork elements made from recyclable mineral foam to create a pre-cast concrete slab, which they say is lighter and better insulated while using 70 per cent less material.

The system, known as FoamWork, sees a conventional rectangular mould filled with 24 mineral formwork elements in different shapes and sizes before concrete is cast around them and left to cure, creating hollow cells throughout the panel.

The resulting internal geometry was optimised to reinforce the slab along its principal stress lines, creating the necessary strength while drastically reducing the amount of concrete needed to produce it.

If adopted at scale, architect Patrick Bedarf believes this could help to reduce the carbon footprint of construction and cement in particular, which is the biggest single emitter of CO2 in the world.

"Construction contributes significantly to CO2 emissions, with cement production alone responsible for 7 per cent of emissions globally," said Bedarf, who is a researcher in the department for Digital Building Technologies (DBT) at ETH Zurich.

"With FoamWork, emissions through material consumption would be reduced in the concrete slab. The lower mass would also have secondary effects on the dimensioning of the entire load-bearing structure and would reduce efforts for shipping and handling on construction sites."

The formwork elements themselves are 3D printed by an autonomous robotic arm using mineral foam, which is traditionally made by foaming cement and is increasingly being used as an insulation material in construction due to its high porosity.

To avoid the emissions associated with cement production, the FoamWork system makes use of an alternative developed by Swiss start-up FenX that is made of a waste product from coal-fired power stations called fly ash.

This helps to minimise the carbon footprint of the foam, the company claims, even when considering the emissions associated with coal combustion.

The final FoamWork elements can either be left in place to improve the insulation of the precast concrete slab or recycled and reprinted to create new formwork.

Considering that no offcuts are created in the additive manufacturing process, this means the entire system has the potential to be zero-waste.

"Hollow plastic forms can be used to reduce concrete in large standardised slabs and, for smaller non-standardized applications, complex formwork for concrete is manually built in timber or CNC-cut from dense plastic foams," he added.

"Both approaches are labour-intensive and waste a lot of material through chipping and offcuts." 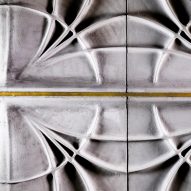 The internal geometry of the concrete panel was optimised for its particular shape, informed by the way that Italian architect Pier Luigi Nervi developed floor slabs in the 1940s that were ribbed along their principal stress lines.

But the shape and configuration of the internal cells could be customised to create a range of concrete building elements from walls to entire roofs.

In a bid to tackle its outsized carbon footprint, the Global Cement and Concrete Association recently committed itself to reaching net-zero emissions by 2050.

To achieve this, the industry is working to find substitutes for clinker – the most carbon-intensive ingredient of cement – as well as making use of carbon capture technologies to remove the emissions created in the clinker production process.

It currently involves burning calcium carbonate at high temperatures to separate the calcium needed to create cement from the carbon, which is released into the atmosphere.

Until these kinds of innovations can be adopted at scale, the easiest way for architects to minimise the embodied carbon footprint of their buildings from materials and construction is to use high-carbon materials such as concrete and steel more sparingly and efficiently.

Currently, a large number of buildings in the UK are overdesigned according to Cambridge University engineering professor Julian Allwood.

"We have done a lot of studies on the utilisation of steel," he said during RIBA's recent Built Environment Summit. "And we found that most commercial buildings in the UK are overdesigned by up to 50 to 60 per cent."

"What we can do today to reduce emissions in construction is all about material efficiency, using less materials because the materials have embodied emissions."

The photography is by Patrick Bedarf.