Researchers from ETH Zurich are building a tall architectural structure that will evoke the Hanging Gardens of Babylon, in a project that involves working collaboratively with robots.

Called Semiramis after the Assyrian queen who is sometimes associated with the ancient garden, the project has been designed with the help of artificial intelligence and is being built with the assistance of four robots.

The structure will feature five geometrically complex wooden pods, each planted with trees and other vegetation. It will reach 22.5 metres into the air and be supported by eight thin steel pillars.

Semiramis is destined for the grounds of Tech Cluster Zug, an innovation centre under construction in Zug, Switzerland. The structure will be erected and planted out in spring 2022.

The design involved software and algorithms created by the Swiss university's researchers and applied for the first time on this project.

A machine learning algorithm, developed in collaboration with the Swiss Data Science Center, presented the researchers with a range of design options that fit their inputted requirements.

The options included different pod shapes and spatial arrangements and would highlight how the differences affected individual target variables, such as pod irrigation.

The researchers then tweaked the designs in the Immersive Design Lab, an augmented reality laboratory on the university's Hönggerberg campus.

This used a software developed jointly with ETH Zurich's Computational Robotics Lab, and allowed the researchers to explore and fine-tune the designs together in augmented reality.

The software would adjust the structure's entire geometry around any change, always generating the most efficient and load-bearing configuration.

"The computer model lets us reverse the conventional design process and explore the full design scope for a project," said Kohler. "This leads to new, often surprising geometries."

The final design the researchers chose for Semiramis is now under construction at the Robotic Fabrication Laboratory at ETH Zurich, where four suspended robotic arms work in tandem to assemble its wooden pieces. 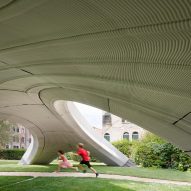 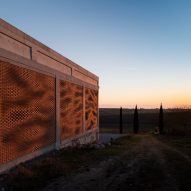 The robots work directly from the computer design, picking up panels and maneuvering them into a precise position, but humans are also integral to the process, as expert craftspeople apply a special casting resin to glue the panels together while they are held in place.

This has benefits for both the workers and the environment, as the craftspeople avoid the work of heavy lifting and positioning, and no resource-intensive substructures are required.

Each of Semiramis' pods is composed of 51-88 wooden panels, and the algorithm calculating the robot arms' movements makes sure they avoid collision.

"Semiramis has been a beacon project for architectural research, bringing together people inside and outside ETH and advancing the key research topics of the present, such as interactive architectural design and digital fabrication," said Kohler.

ETH Zurich is one of the world's leading technology universities and undertakes many complex architectural projects. Its recent work includes the DFAB House, which is entirely designed and built using new digital processes, such as robotic timber construction and 3D sand printing.

Its researchers were also behind the Kitrvs winery in Greece, which has a wall laid using a technology dubbed "augmented bricklaying".