In the second exclusive interview that we filmed with Richard Rogers, the late British architect explained the story behind the Centre Pompidou that he designed with Renzo Piano – and the controversy it generated.

The interview is one of a series Dezeen filmed with Rogers to coincide with a retrospective of his work at the Royal Academy of Arts in London in 2013.

Rogers, who passed away at the age of 88 last month, was one of the world's best-known architects and a pioneer of high-tech architecture.

Among his most notable works was the Centre Pompidou, an inside-out cultural centre in Paris that he completed in 1977 with Italian architect Piano, a fellow high-tech pioneer.

In this interview, filmed at the Rogers Stirk Harbour + Partners studio in London, Rogers recalled the tumultuous process of designing the Centre Pompidou, which was initially "vilified" before becoming "the most visited building" in Europe.

However, he also described the flak he received from people who hated the building. He recalled a conversation with a woman who struck up a conversation with him outside the centre: "I said that I designed it and she hit me on the head with her umbrella."

Read on for a transcript of the interview below:

"The Pompidou – it was actually called Beaubourg when we did the competition, and Pompidou when Pompidou [the former president of France] died a year before completion – was a competition for a museum, a library, a music centre and design centre. I'm going to say in the centre of Paris but in a very rundown area.

"When we did our first studies, it showed that there was no public space nearby. So, we created this big piazza. I think there were 681 entries. Strangely enough, there were no other ones with a big piazza.

"The piazza is really critical to the workings of the Pompidou and in a sense, it was a Fun Palace, using a very well known phrase by Joan Littlewood and Cedric Price of the post-war era, shall we say, it wasn't just a building.

"So the idea was you had a public space horizontal, and you'd go up the facade of the building in streets in the air and escalators sloping across it. So the whole thing became very much dynamic. People come to see people as well as to see art and people come to meet people. So we wanted to make that as packed as a theatre.

"And on the facade in those days was an electronic screen that could connect up with any other museum or cultural centre. We had it all going very well until Pompidou died and Giscard [the subsequent president of France] came along and he said those terrible words that sunk it with no hands. 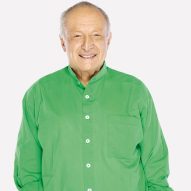 "Having said that, what Renzo and I had worked out was, of course, the French are fantastic at promenading. So they promenade through the facade, they promenaded through the piazza, and then all these other people came. It was attacked, vilified whilst we were designing, from the first day onwards. Nobody said one kind word until it opened and when people started to queue up, then it became open.

"I remember once, standing outside on a rainy day, and there was this small woman with an umbrella she said, 'do you want to have shelter?' and I said, 'yes, thank you'. We started talking as one does in the rain. And she said, 'what do you think of this building? The Pompidou'.

"Stupidly, which I'd never normally do, I said that I designed it and she hit me on the head with her umbrella. That was just typical of the general reaction of the people, especially during the design and construction stage, destroying their beautiful Paris.

"And of course, you know, it does not fit in within the sense of what was Paris. All good architecture is modern in its time. Gothic was a fantastic shock; the Renaissance was another shock to all the little medieval buildings.

"I come from Florence and the Strozzi palace, which is one of the largest palaces in Florence, which is, I suppose, four storeys going eight storeys, and there's a famous document of one of the neighbours saying 'you're building a building completely out of scale with ours', a tower next to it. Because, of course, from one to eight is a big difference.

"So changes, the shock of the new is always rather difficult to get over. Though it's much better, it's got better, partly because I'm older, people looking at the buildings of mine and Renzo's, they either love them or hate them, so they're more used to it, but boy was that hard.

"So then we said, 'okay, we'll have fantastic flexibility'. The one thing we knew about this age is it's all about change, if there's one constant, it's change. So we said that 'we will make massive floors', which were in fact the size of two football pitches with no vertical interruptions, structure on the outside, mechanical service on the outside, people movement on the outside and theoretically you can do anything you want on those floors.

"We didn't say where the museum should go, where the library should go, and of course, the library changed radically because when we started there were books and by the time we finished it books were almost finished because it was IT.

"So again, that's about change, because you needed it to have a library, you needed it to have different types of spaces, all these racks of books, you know, more or less go, and so on. Which is typical of an evolving, lively institution, whether it's an office building or even a house, it has to respond.

"And today's buildings, unlike shall we say the buildings of the past when we used to say architecture is like frozen music, actually, I would suggest today, architecture is more like jazz, dynamic jazz, jazz that you can interpret in different ways within a beat in a framework. So we were looking also at that as the whole modern art and modern thinking was going.

"Renzo and I, well we've been very close friends, we met about two years before we did Pompidou and now we speak at least once a week and we go sailing together so we're very, very close. It's quite difficult to divide us.

"If you look at our earlier work, we did the house in Wimbledon for my parents, which is a single storey house and steel and it's highly insulated, it's transparent, the bathrooms are in a very compact way, everything can move, all the partitions can move. You can see a link from that to the Pompidou. The difference of about 1,000 times the scale.

"If you look at Renzo's work, beautifully structured work. He's done some wonderful laboratories, tremendous engineering, construction processes and buildings. His father was a contractor, a major contractor.

"If you put those together, you could argue that it sort of goes in that in that direction. Of course, it's not true, because he probably could have gone in another direction.

"We wanted to make a building which clearly was of our period, which caught the zeitgeist of the now. The big thing in those days, the 60s, is the student movement and in France, it is said that Pompidou had a plane revving up because he thought he'd lost the war against the students, the intellectuals, and the workers.

"I met my wife, with other friends who were escaping the draft, not that she was but her friends were. There was a highly active period of politics. And you could argue that was also part of the concept that this is a dynamic period, a period which we know will change but we want to catch what's going on at the moment.

"But overall, yes, we said we will put the building not as you want it, in those days in the middle of the piazza, but actually on one side to give the people a place to meet, we'll put it on the street because we'll keep the nature of the long street.

It is a place for the meeting of all people

"We need a movement system which is dynamic, I hate going up in sort of internal lifts with people's heads in my stomach or vice versa. I mean, why not give them the view? Movement should be celebrated.

"There were the Metabolists in Japan who were working, there was Archigram in England. I went to school with Peter Cook in the Archigram movement. And all those were definitely influences.

"The piazza in Siena. I don't think we'd go to look at the piazza in Siena, I think we didn't even realise we'd done a piazza sloping a bit like Siena until we did it. But of course, in our minds, Siena must have been there and many other wonderful Italian piazzas.

"The whole idea of Pompidou was that it is a place for the meeting of all people. And the success of it was that the French took it over and it was the most visited building certainly in Europe."