Production designer Jon Henson drew on minimalist Japanese architecture to create a house that acts "like a fourth character" for the set of BBC television series The Girl Before.

Written by British author JP Delaney, The Girl Before is a psychological thriller novel set in a fictional one-bedroom house called One Folgate Street in Hampstead, London.

For the TV series, which was created by BBC and HBO Max, the majority of the interior scenes were filmed last spring in a purpose-built set at Bottle Yard Studios in Bristol, while the house's exterior was specially built.

"I wanted it [the house] to feel sometimes like a sanctuary – calm and safe, almost zen-like – and then sometimes to feel like a fortress or a prison," Henson told Dezeen.

"The brief from the director was that it should be almost like a fourth character," he said. "But I wanted to take that further and create a space which could almost atmospherically change, depending on the scene and what we needed dramatically."

This sentiment echoes Delaney's intentions. In an interview with Dezeen, he explained how he wanted to make the house feel like the protagonist of the novel.

"This is a book about four characters and the strongest character is the house," Delaney said. "It's the most dominant character."

The Girl Before follows two women who live in the same house three years apart, under strict conditions prescribed by the architect of the house.

The first tenant (Jessica Plummer), who is in a romantic relationship with the architect, dies at the address under suspicious circumstances. A series of unnerving events at the house leads the second woman (Gugu Mbatha-Raw) to question whether she will suffer the same fate.

After reading the script and hearing details about the house – which is described as modern and minimalist in the book – Henson began to do extensive research into architects and architecture for the four-part series.

He was drawn in particular to F Residence by Japanese architecture studio Gosize, a minimalist concrete house in the Japanese prefecture of Hygo that was featured on Dezeen in 2019.

"I referenced a lot of Japanese architecture," he recalled. "If you look at the house in Hygo by Gosize you'll see lots of its influence."

A standout feature of F Residence is a double-height courtyard that has a single tree in its middle. The courtyard is surrounded by large windows, providing the occupants with multiple angles to see the tree from inside the house.

The production team for The Girl Before mimicked this by building giant sheets of glass and arranging them around a lone maple tree in the middle of a concrete courtyard on the set.

The large windows also served a functional purpose for the film crew: they provided plenty of angles to shoot from. This helped create variety on the shoot, which was important as Henson estimates around 60 per cent of the series is filmed in the house.

"The biggest challenge with the set was that we were going to be filming there for six or seven weeks," explained Henson.

"That initially threw up this question of 'how can you create a space which you can shoot in for that period of time without it becoming boring?'" he added.

"That led to me wanting to create a space which offered lots of different perspectives, so we created huge expanses of glass looking into the courtyard to give ourselves another dimension." 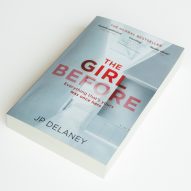 Henson worked closely with the series' director Lisa Bruhlmann to ensure that the different perspectives worked before the actors arrived on set.

After marking out the plans on the studio floor, he walked Bruhlmann through the space, adjusting the position of the windows and doors as they went.

While researching Japanese architecture, Henson also came across lattice timber details in many buildings and decided to incorporate this into the facade of One Folgate Street.

"I'd seen that in Japan they often use slatted timber – narrow slats of timber with spaces between them," he recalled.

As a result, he chose to make the house's striking facade out of thousands of timber slats, which the team painted silver.

In the book, Delaney describes One Folgate Street as being situated along a row of houses, but Henson decided that a cul-de-sac was a more suitable filming location.

The team found an existing plot of land on which to build the facade of the house as seen in the series, though the interiors were shot at Bottle Yard Studios.

"We wanted it to be at the end of a cul de sac, so that it had a stronger perspective on it that really led you to the house," he said. "We found a street that had some old garages at one end, so we knocked down the garages and built the house."

Like the facade, many of the interior furnishings that appear in the series – including the sofa, dining table and the fatal cantilevered stairs – were also built by the production team.

This was in part because Henson wanted to ensure that every detail was exact, given the limited amount of furnishing.

"I discovered early on that minimalism is actually a lot harder than the opposite," he said. "Every chair that you choose, every light that you choose is such a strong point of focus, so I found it harder to design it than something that was full of stuff."

According to Henson, the most challenging part of creating the set for The Girl Before was trying to make it obvious that the two women lived in the same house in different time periods.

"I was really worried that, because of the stories of the two women running almost in parallel in the same house but three years apart, it would become confusing," said the designer.

To avoid confusing viewers, Henson decided to employ effects that made it appear as though the women were living in different seasons.

As the series swapped from one character's story to the other, the production team changed the tree in the courtyard from being in full bloom to being covered in autumnal leaves. 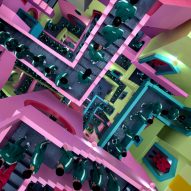 Henson also built rain bars into the main courtyard from which water could pour down to make it appear as if it was raining. This meant that he had to put the entire set on a raised platform above an extraction tank underneath the stones in the courtyard, allowing water to be drained and pumped out.

"We might be shooting Gugu in the morning and then Jess in the afternoon and so we had to find a window to change the tree with an hour's turnaround time," Henson said.

"You can imagine what that led to," he laughed.

The Girl Before was first released in the UK online on BBC One on 19 December 2021. The full series is available to watch on BBC iPlayer.