Japanese practice Gosize has combined an architects' studio with a house in a concrete frame with large openings around a small courtyard with a simple pond in Hyōgo, Japan.

Different spaces are split over three levels according to their function.

The office occupies the ground floor, with a bedroom above and a large living, kitchen and space at second floor level with a terrace overlooking the street below.

The ground floor of F Residence was conceived of by Gosize as a doma, an element of traditional Japanese architecture where a dirt floor extends from the entryway and can be walked on without removing your shoes.

Here, the doma is polished stone floor, with the double-height courtyard and pond as a focal point.

The courtyard is an open air extension of the indoor living space and is paved with rough stone that extends into the living space.

A minimalist, rectangular pond lined with black tiles occupies one side of the courtyard, which is planted with a single tree surrounded by the angled paving stones.

Where this courtyard meets the site boundary, a high concrete wall has been built to prevent overlooking from neighbours.

"The spaces become increasingly open to the outside world as they move upwards, offering a chance to come into sync with nature and open oneself to the surrounding landscape," said Gosize, which was founded by Go Fujita in 1999.

At first floor level, this double-height void takes up the western half of the plan of F Residence. A large window frames the view of the tree planted below. 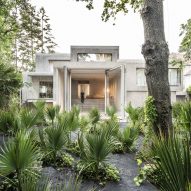 The bedroom itself has been kept entirely private, turning its back on the courtyard with a thick concrete wall.

A thin slit window is the only opening, while the he adjacent bathroom is illuminated by a large skylight.

The only glimpses outside at these levels are through thin openings in the concrete walls and the courtyard, but the upper level has a deep, full-height opening.

This opening is occupied by a terrace space, overlooked by the living area through a glass wall.

Inside and out, the texture and formwork markings of the structure's concrete have been left exposed, and built-in concrete furniture provides seating areas in the second-floor living space.

"Seeking to reflect a distinctive Japanese aesthetic that favours natural materials and finds beauty in simplicity, the design emphasises plainness and blank space in the interior," said Gosize.

A strip of stone panelling covers the lower level of the home, which the practice say is "intended to blend in with the environment".

Anotheer Japanese house featuring a courtyard with a single tree is Umber, a residence in Tokyo designed by Apollo Architects and Associates .

Photography is by Akiyoshi Fukuzawa.