For his Souvenir d'un Futur series, Kronental has photographed residents of estates including Ricardo Bofill's Postmodern Les Espaces d'Abraxas at Noisy-le-Grand and Emile Aillaud's Cité Pablo Picasso at Nanterre. His images show the concrete structures and vast open spaces of the futuristic complexes, which were mainly built during the 1970s and 1980s. 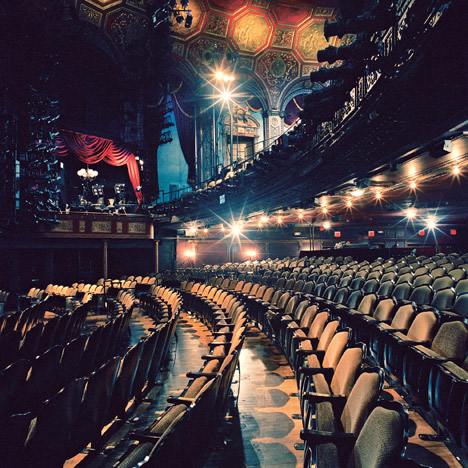 In this exclusive essay for Dezeen, he explains how his photos highlight a sometimes neglected generation in often marginalised urban areas, which both "carry with them the memory of a Modernist utopia".

As a laureate of the 2015 La Bourse du Talent award in the Landscape/Architecture category, Kronental's work is on show at the National Library of France until 7 February 2016.

I began to photograph the elderly who live in the large estates of Paris region four years ago. I think that initially I was really influenced by my experience in China where I lived for six months in 2008. I discovered photography there.

The big cities of this territory stunned me by their gigantic size, their tentacular immoderation, their paradoxes, their metamorphosis, their contrasts and the way the human being lives in this abundant and over-populated town planning. I was absorbed by the atmosphere of the megalopolis and by its astounding mix of futurism and tradition. It certainly stimulated the search for a juxtaposition of ages in my later projects.

In 2010, as I was walking in Courbevoie, I discovered a tiny little street where time seemed suspended for 50 years – countryside at the foot of office buildings of the La Défense business district. The place was surreal.

I befriended a couple of old people and started to photograph them. Their traditional garden offered a stark contrast with the surrounding skyline of towers, bringing together two different eras, two different living styles.

I wanted to undertake a project that associates men and architecture

At the same time, I developed a great attraction towards the architecture of the "grands ensembles" (large housing projects). Two areas next to my home have been essential in my approach: Les Damiers at Courbevoie and Les Tours Aillaud – they are also called Tours Nuages or Cité Pablo Picasso – at Nanterre. The more I photographed them, the more I was amazed. The buildings seemed timeless, as if their reason for being oscillated between past and present.

Then I discovered in 2011 other examples of monumental and spectacular architecture around Paris and in the capital. I am fascinated by their oversized urbanism and their rough and poetic appearance.

I have always been inspired by seniors and I had this deep feeling to put them at the front stage. I wished to communicate with them, know their life and try to deconstruct this sometimes depreciating image of old age that arises from our society.

I said to myself that there was a subject to explore, both on the passing of the generations as well as on the impact of time on the architecture and the lives that it tries to harmonise.

These large estates are today often stigmatised by the media

Souvenir d'un Futur documents the life of senior citizens living in the grands ensembles around Paris. For the most part erected between the 1950s and the 1980s to address the housing crisis, urban migration and the inflow of foreign migrants while meeting modern comfort needs, these large estates are today often stigmatised by the media and marginalised.

In sharp contrast with these clichéd views, and fascinated by these projects' ambitious and dated modernistic features, I was moved by the living conditions of these urban veterans who have aged there.

I desired to question myself about conditions of their existence, to pour some light on the generation that we forget sometimes. By posing a view at the suburban areas, often marginalised and underestimated, I wanted to express my feelings of the poetry in front of this universe, which seems to age slowly and take with it the memories of a Modernist utopia.

I wanted to undertake a project that associates men and architecture. It was thus essential to gather these two worlds in one same photographic series. While tackling the large housing estates issue, I wondered whether urban structures were adapted to the needs of their inhabitants. By switching from portraits, which imply facial emotions, to landscapes, in which the person is lost in the vast neighbourhood, I wanted to show the scale ratios and interactions between the person and his city.

There is an unsettling paradox of life and void

Through this series, I aim at questioning the spectator about the forgetting of the old age. At a time when all the intentions are directed towards youth, maintaining indifference and prejudice toward seniors, this vision creates a shock by recalling the existence of these people and by highlighting their problems.

In spite of their melancholic look, these elders, with the strength of their dignified and elegant posture, assert their fight against the age. They are the only ones to fill up the space in this series from which youth has purposely been obliterated. By settling down in these futuristic buildings they have re-conquered a space – one that was not originally intended.

These large housing projects are often criticised, they fascinate or bother but leave no one indifferent. Their size reminds me of Colossus. There is an unsettling paradox of life and void. Multifaceted social housing projects; sometimes deserted, sometimes filled with life.

I wanted to create the atmosphere of a parallel world mixing past and future while consciously conveying the impression of towns that would be emptied of their residents. In this magnificent and ghostly world, the structures of our cities would be titanic and gobble the human – the product of our fears and hopes for an organisation of the city.