This year's Antepavilion in London will not go ahead as planned, said organisers, after a planning inquiry failed to resolve a dispute with the local council.

Russell Gray of Shiva, the organiser and sponsor of arts charity Antepavilion, told Dezeen that the contest had been postponed while he seeks support from Hackney Council.

"It's in Hackney's hands," he said. "It's actually them who will decide how definite or indefinite it is."

The decision comes after a planning inspector partially upheld one of two enforcement notices issued to Shiva by Hackney Council to restrict the use of the Hoxton Docks warehouse where the previous years' structures were installed.

Antepavilion structures have been erected at Hoxton Docks every year since 2017 as part of an annual competition that was previously held in association with the Architecture Foundation.

These structures have included the duct-shaped HVAC pavilion, the inflatable AirDraft barge, the rooftop Potemkin Theatre and the singing fibreglass Sharks!

However, the council claims Shiva needs to obtain planning permission before installing any new architectural structures on the roof or decking of the canalside warehouse.

The organisers argue that the site should be treated as a "sculpture park", where temporary structures can be installed without planning permission.

"We would say it's akin to a sculpture park, where something comes in, something goes out, and there's a rotation of works," said Gray.

In 2019, Hackney Council issued an enforcement notice to Shiva demanding the removal of four unauthorised architectural structures, including HVAC and Potemkin Theatre.

A second notice, issued in 2020, sought to prevent the building being used as a cinema, bar or art venue, and called for the removal of all artistic works from the site, including AirDraft and Sharks!

Planning inspector Luke Perkins has quashed the second of these enforcement notices and granted retrospective planning permission for the site's change of use.

However, he has reinstated the initial enforcement in an amended form, stating: "I have no power to direct that future art installations displayed externally do not require permission in their own right".

The organisers believe the ruling makes it impossible for Hoxton Docks to continue to host the Antepavilion, unless the council offers support for the contest.

"We won [our appeal] on the crucial consideration of entitlement to display art, which after 20 years of doing it, Hackney had decided was somehow illegal," Gray told Dezeen.

"It's no surprise they lost on that," he said. "But that's not sufficient to allow the competition to proceed in its current form, without Hackney taking a more cooperative approach."

Upcoming court cases may be called off

Three court cases relating to the dispute are scheduled to take place in February and March, two of which relate to an injunction taken out by Hackney Council against the Sharks! installation. The Architects' Journal reported that these cases may be called off following the planning inquiry ruling.

A council spokesperson told the Architects' Journal: "This decision is a vindication of the council's overall enforcement approach at Hoxton Docks, with the planning inspector's verdict endorsing our position that the rooftop structures required planning permission and had a harmful impact on both the character and appearance of the conservation area and the amenities of towpath users."

"The outcome also makes clear that performances at the venue should take place indoors and that the use of the building's rooftop should be tightly restricted, and we are now considering what the detail of the verdict means for art installations on the canal itself," the spokesperson added. 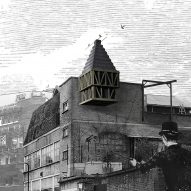 The fifth Antepavilion, The Antechamber by Studio Nima Sardar, was unveiled at Hoxton Docks in August 2021. In line with the latest contest requirements, it was designed to be "collapsible and transportable" to allow for easy removal.

"It wouldn't be much good if we selected a winner and put it up and immediately an injunction gets slapped on it," Shiva previously told Dezeen.

The Antechamber was the first Antepavilion installed without the support of the Architectural Foundation, which stopped collaborating on the installations after two years of ongoing legal battles.

Last year also saw the architecture community outraged as footage was revealed of police storming the Antepavilion building. The raid came ahead of the opening of a rooftop installation called All Along the Watchtower, which is similar to installations built by environment protest group Extinction Rebellion to block roads.

Police believed the Antepavilion building was being used by Extinction Rebellion to prepare for protests against media groups that are dismissive of climate change.