This year's Antepavilion installation opens in London tomorrow, with the charity that organises the annual competition warning that it could be forced to close.

The Antechamber by Studio Nima Sardar will be unveiled at Hoxton Docks on the Regents Canal in east London this Saturday, just a few weeks ahead of a four-day planning inquiry that could determine the fate of the popular programme.

The inquiry, which begins at Hackney Town Hall on 7 September, will conclude an ongoing battle between the local council and architecture charity Antepavilion over alleged breaches of planning regulations.

"Should Hackney Council get their way in the upcoming planning inquiry, this may be the last Antepavilion," Antepavilion said in a statement.

The subject of the upcoming planning inquiry is an appeal by Antepavilion against two planning enforcement notices, one opposing rooftop structures at Hoxton Docks and one alleging change of use.

The council has previously issued a demolition notice for several Antepavilions, none of which had planning permission, and blocked last year's installation of floating fibreglass sharks by architect Jaimie Shorten with a court injunction.

"There's a wide range of outcomes," organiser Russell Gray told Dezeen. "It's not just win-lose, because there are so many different aspects to the actual inquiry issues. There's a lot of things in dispute, and we could win on some and lose on others, or we could win all or lose all."

A ruling against the pop-up installations could make it impossible to hold the competition in the future, Gray said.

"It is possible to imagine a scenario in which we're told we have to get planning permission for any installations, and that then becomes impossible," he explained. "This is just too much an impromptu temporary installation."

Gray added that the charity's "central activity is the annual Antepavilion competition and if that were killed off by the wrong decision at the inquiry, then the heart is ripped out of it and therefore it very likely would not survive."

"It certainly would not survive in its current form," he added. "We're urging people to come and have their say at the public inquiry on 7 September."

This year's pavilion is "fully collapsible"

The Antechamber installation, which is the fifth to be built at the canalside building, was informed by Victorian fairgrounds and the area's history.

It is shaped like a large camera-obscura – a 17th-century optical device that is typically used to plan and arrange compositions – and was constructed using recycled timber from Antepavilion's dismantled 2019 installation, the Potemkin Theatre.

It was designed to be fully collapsible and transportable, a requirement for the 2021 submissions. "We had to respond to the threats from the council," Gray said.

"It wouldn't be much good if we selected a winner and put it up and immediately an injunction gets slapped on it. So we had to have a defensible position as to the transience and the temporary nature of the structure."

Gray also spoke about the recent incident in which police stormed the building and arrested staff over concerns the venue was being used by Extinction Rebellion to plan protests.

This followed the construction of a tensegrity structure on the roof of the Antepavilion headquarters and a series of workshops in which the structure was built by volunteers. 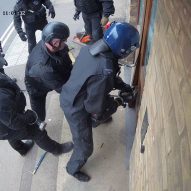 Gray and others spent the night in jail but were released without charge the next day. Footage of the police raid caused widespread concern and accusations of "sinister" tactics.

"It's made me very angry and it's made me resolve to seek redress from the police, which incidentally we already have," Gray said. "We're looking to get permission from the court, as is required, to claim for judicial review, which would decide the lawfulness of that raid."

"We say it's unlawful and we haven't had a reply from the police yet," he added. "If they won't admit it's unlawful, we're likely to proceed to a claim for judicial review."

Designed by Project Bunny Rabbit, the reusable bamboo-and-cable structure is called All Along the Watchtower and was constructed as a "special early summer commission" for this year's Antepavilion competition.

Founded in 2017, Antepavilion is an arts and architecture charity that holds an annual competition inviting architects, designers and craftspeople to create a pavilion.

Previous winners include Thomas Randall-Page and Benedetta Rogers' inflatable theatre on an old coal barge called AirDraft and H-VAC by PUP Architects, a rooftop room disguised as a ventilation duct.

Earlier this year, its former partner Architecture Foundation withdrew its support for the competition following the planning controversies.

Antechamber by Studio Nima Sardar opens at Hoxton Docks, London on 21 August. See Dezeen Events Guide for an up-to-date list of architecture and design events taking place around the world.