White forms with geometric cut-outs have been inserted into the walls of a former granary mill to create this coastal holiday home in Portugal's Algarve region, designed by architecture studio Atelier Data.

Named Casa Cabrita Moleiro, the home occupies the former site of the Cabrita Mill. Once operated by the owner's grandfather, the mill had since fallen into disuse during the region's transformation into a popular holiday destination.

Instead of replacing the existing buildings, Lisbon-based Atelier Data integrated the walls into the new five-bedroom holiday home, creating a cluster of forms alongside an old windmill.

Both the shell of the old structures and the newly-built forms are unified by an external finish of bright white render, giving them a "contemporary, minimal rural character" which was informed by the region's vernacular architecture.

"Driven by the desire to repurpose the existing structures, [we] integrated them into the new design, creating a series of interior and exterior spaces that celebrate the surrounding landscape while providing a series of private areas," said the studio.

"The design has been inspired by the local vernacular," it continued. "'Açoteia Algarvia', a flat rooftop feature for observing the sea and drying produce in the sun, has been reinterpreted and introduced on the new structures." 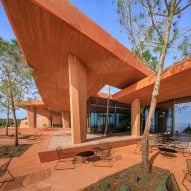 To the east, an open plan living, kitchen and dining block opens onto a pool and terrace through sliding glass doors, forming the "core social area of the house".

"[The patio] acts as a 'home divider', enabling it to act as a five-bedroom holiday house or a two-bedroom one with a separate three-bedroom annex," said the studio.

A taller volume containing two bedrooms abuts the living room at a slight angle, with a strip of windows looking out towards the sea and a rooftop terrace with a jacuzzi.

To the west, a taller block extends out of the existing walls of the former miller's house, containing an additional three en-suite bedrooms, which open onto covered terraces with geometric cut-outs.

"A series of geometric volumes and carved-out voids provide private patios to the bedrooms, while windows, balconies and terraces strategically frame views to the surrounding arid landscape and the Atlantic Ocean," explained the studio.

The minimal exterior finishes continue to the interiors, which feature polished concrete walls and in-situ cast concrete ceilings that have been painted white.

The Algarve is a popular location for many retreats and resorts. Other recently completed schemes in the region include a red concrete clubhouse by RCR Architectes, and an off-grid retreat by Álvaro Siza.

Photography is by Richard John Seymour.