Engineering firm Buro Happold has become the latest signatory to the SE 2050 Commitment Program, which unites structural engineering firms behind the common goal to slash embodied carbon emissions from their projects by 2050.

Spearheaded by the Structural Engineering Institute (SEI) of the American Society of Civil Engineers, the pledge focuses specifically on tackling the emissions associated with structural systems, their construction and material use.

This accounts for the largest portion of a building's embodied carbon footprint, typically around 50 per cent, while the two most-used structural materials – steel and concrete – are together responsible for almost 12 per cent of all global greenhouse gas emissions.

It is here that structural engineers can make the biggest impact in the race to create a net-zero built environment by 2050 and help limit global warming to around 1.5 degrees Celsius in line with the Paris Agreement, according to Buro Happold principal Stephen Curtis.

"There has been, to date, a focus on operational carbon," he told Dezeen. "As structural engineers, we are more able to influence embodied carbon, so that is the focus for us."

"This is more than just a concrete and steel issue"

Buro Happold has already set a goal to halve the embodied carbon footprint of its projects by 2030.

By joining the Structural Engineers 2050 Commitment Program, the firm has extended this commitment to measuring, reducing and ultimately eliminating all embodied carbon emissions in its projects from structural systems by 2050.

The programme, which already counts Arup and SOM among its 69 signatories, provides engineering practices with the resources and guidance to achieve this goal, as well as for offsetting any hard-to-remove emissions that cannot be eliminated.

Buro Happold says this process will involve not just replacing and reducing polluting materials in its projects but, crucially, also educating the many other stakeholders that are involved in the process of getting a project built, from clients to planners and architects.

"This is more than just a concrete and steel issue," Curtis said. "Structural engineers have been requiring cement replacement in concrete and recycled content in steel for a long time."

"We know we will need to educate and explain to the other stakeholders on our projects why this issue is important and what may be viable alternate options, whether that means timber construction or other alternate technologies," he added.

"To support this, we plan to undertake comparative embodied carbon assessments of our structural design options during the initial project phases, making carbon part of the decision-making process."

Architecture lagging behind other industries

The SE 2050 Commitment Program was formulated in response to a challenge originally put forward in 2019 by the Carbon Leadership Forum, a non-profit based at the University of Washington that is dedicated to radically reducing embodied carbon in the built environment through collective action.

On the other side of the Atlantic, more than 234 British structural engineers and their firms – including Buro Happold – have so far set their own net-zero carbon targets as signatories of Structural Engineers Declare. 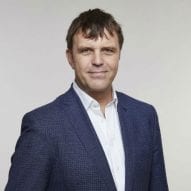 Similar efforts are happening across the built environment sector, with the cement and concrete industry committed to reaching net-zero emissions by 2050.

Dezeen has set a more ambitious target of becoming a net-zero business by 2025.

But according to COP26 climate action champion Nigel Topping, architecture is still "one of the least well-represented businesses" in UN's Race to Zero campaign, with none of the 50 largest practices signed up so far.

Similarly, only 300 out of the Royal Institute of British Architects' 4,000 chartered practices are have currently committed to its net-zero carbon challenge.

The top photograph is by Brad Feinknopf.