Buro Happold's director of sustainability Maria Smith has declared herself carbon neutral. She explains how she dramatically reduced her carbon footprint by going vegan and stopping flying.

Smith, who previously co-founded practices Interrobang and Studio Weave, set herself the challenge of going carbon neutral in response to the climate emergency.

"I've been trying to reduce my carbon footprint for a while," she told Dezeen.

"The biggest changes I've made are going vegan, switching to a green energy tariff, and quitting flying. I don't drive, or buy a lot of new stuff, or have any kids so I wasn't starting from a super carbon-intensive lifestyle, but there have been challenges."

"Travelling by train is much more pleasant"

Forgoing air travel – prior to the coronavirus pandemic – was one of the biggest hurdles to overcome.

"Quitting flying was probably the trickiest thing," said Smith. "I was halfway through curating the Oslo Architecture Triennale at the time so this meant committing to some long train journeys! Travelling by train is much more pleasant though and Interrail is my friend."

Travelling by rail dovetailed well with the Oslo Architecture Triennale 2019 theme chosen by Smith and her co-curators: Degrowth, after the movement to reduce industrial-scale production and consumption. 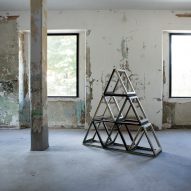 Switching to a greener energy supplier was simple, and Smith opted to use the company Bulb.

"I live in a 1960s concrete-framed building with double glazing and a cavity wall but it's pretty leaky and our energy use is nothing to be proud of at around 130 kilowatt-hours per metres squared per year,"  she explained.

"However, with a green tariff, every unit of electricity used is matched with a unit generated with renewables, and much of the gas is biogas, generated from anaerobic digesters processing food and farm waste."

"Everyone can reduce their impact"

A vegan diet is the least carbon-intensive option and Smith found the transition relatively smooth, despite struggling to give up certain animal products. "Turns out I love eggs – who knew," she said.

"I recently got obsessed with making homemade jam and have tried my hand at urban foraging. Lockdown also gave me a chance to learn decorative darning, so my moth-eaten jumpers will last many more winters to come. It's all totally cheesy and worthy and off-putting from one perspective, and just sensible from another."

Going carbon neutral isn't practical or accessible for everyone, said Smith, but the more people can afford to, the more they should cut back.

"The idea that we should all get nice and rich so that we can afford to look after the environment is fatally flawed," said Smith.

"Everyone can reduce their impact. But those with more money probably should do it the most," she added.

Extractavism describes the large scale economic practice of extracting natural resources – such as coal, gas, oil, wood and precious metals – from the Earth to sell for profit.

Construction one of "most environmentally damaging industries"

The architecture industry is particularly extractive – and has one of the largest carbon footprints. A report from the World Green Building Council estimates building and construction are responsible for 39 per cent of the world's carbon emissions.

"I want to recognise that my saying I'm carbon neutral is somewhat glib," said Smith. "I work in one of the most environmentally damaging industries there is: construction." 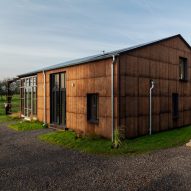 While going carbon neutral is an individual response to the climate emergency, Smith stressed that it has to be part of a wider movement.

"The responsibility for climate action doesn't lie with each of us individually but with our society collectively," she said.

"It'll only be collective action that gets us out of this mess."

Technology company Apple is one major organisation to set a goal to go carbon neutral in the next decade.