A planning law introduced in the city of Brighton and Hove, England, calls for new buildings to include special bricks that provide nests for solitary bees.

Brighton & Hove Council's policy stipulates that all new buildings above five metres should include bee bricks, as well as bird nesting boxes suitable for swifts.

These bee bricks are the same size as regular bricks, but integrate a series of narrow openings like those where solitary bees are known to nest.

The aim is to increase opportunities for biodiversity. With solitary bees making up nearly 250 of the approximately 270 bee species in Britain, they play an important role in the natural ecosystem.

"Bee bricks are just one of quite a number of measures that really should be in place to address biodiversity concerns that have arisen through years of neglect of the natural environment," said Robert Nemeth, the councillor behind the initiative.

"Increased planting, hedgehog holes, swift boxes and bird feeders are all examples of other cheap and simple ideas that, together, could lead to easy medium-term gains," he told Dezeen.

Nemeth proposed the move in 2019 and the stipulation has been included in planning permissions granted by the council since 1 April 2020.

While swift bricks already feature in many UK planning policies, the inclusion of bee bricks is a relatively new development. However Brighton is not alone – councils in Cornwall and Dorset have adopted similar policies.

Faye Clifton of Green&Blue, a company that manufactures bee bricks, said they recreate an existing type of nest that is popular with solitary bees, but which is becoming increasingly rare due to the precision of modern construction.

"Solitary bees nest in crumbling mortar work and old brickwork," she said, "but modern buildings are so perfect that all the cavities are blocked."

"We're putting a habitat into each building in the same way that has occurred naturally for hundreds of years," she told Dezeen.

"If these weren't put in, it would just be a closed wall. That's hundreds and hundreds of miles of land gone to any kind of biodiversity."

Scientists are divided over the effectiveness of bee bricks in improving biodiversity, with some suggesting there are risks they could attract mites and increase spread of disease.

Dave Goulson, a professor of biology at the University of Sussex, told The Guardian he had tested the bricks and found the holes to be too shallow to be "ideal homes for bees" but "are probably better than nothing".

"We are kidding ourselves if we think having one of these in every house is going to make any real difference for biodiversity," he said. "Far more substantial action is needed, and these bricks could easily be used as ‘greenwash' by developers."

Adam Hart, an entomologist and professor of science communication at the University of Gloucestershire, also expressed doubts, stating "well-meaning interventions can have unwanted consequences". 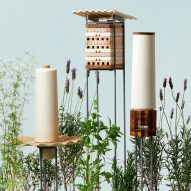 However Francis Gilbert, a professor of ecology at the University of Nottingham, told the newspaper that mites should not be a problem.

"There will be beneficial microbes in the holes as well, so they should not be cleaned. So bee bricks are an unequivocal good thing," he said.

Lars Chittka, a professor in sensory and behavioural ecology at Queen Mary University, said that bees would be able to mitigate potential issues themselves, "which should to some extent counterbalance the risks that come with such long-term nesting opportunities".

Nemeth, who works as both a property developer and a professional beekeeper, is confident that the benefits outweigh the potential risks.

"It's always easy to list the drawbacks with any solution but the key is to keep trying," he said.

He suggested that some critics might be confusing bee bricks, which are typically made from concrete, with "insect hotels" made from wood. These would be more susceptible to rotting and attracting unhygienic pests, he pointed out.

"I've heard that there are risks with mites and other pests. As time goes by and awareness is raised, these sorts of niggles will invariably be ironed out," he stated.

"I've seen many great examples of solitary bees using the bricks and am won over to their potential."

Green&Blue launched its bee brick in 2014 and it was the winner of the Soil Association's Innovation Award the same year.

The brick was developed in partnership with an ecologist. Clifton said it is only effective if positioned close to "bee-friendly planting", as most solitary bees will only forage within 100 metres of their nesting place.

"We're not saying that bee bricks are the solution to everything," she said.

"We're not saying put the bricks in and don't do any planting. It's not greenwashing, it's part of an overall approach to increase biodiversity and to build with nature in mind."

Green&Blue previously carried out a two-year research project with the University of Exeter to test how colour and height impact the effectiveness of the bee brick.

Clifton believes the Brighton policy could create an opportunity for a larger study into the impact of the bee brick over an extended period of time. Nemeth is meeting with the company to discuss further.

"It needs to be over five to 10 years," she said. "We want to map the impact across the country, by engaging people who incorporate our products."

"Brighton can be a brilliant testbed," she said.

A third of the world's food production depends on bees and other pollinators, yet approximately one in 10 bee species in Europe is facing extinction.

Solitary bees are particularly under threat, partly because most bee-friendly initiatives are focused on honey bees. Examples include the Snøhetta-designed Vulkan Beehives and the Invisible Studio-designed Beezantium.

The UK government also recently lifted its ban on neonicotinoid pesticides, which are known to kill bees, putting these species under further threat.