Artist Alexandra Daisy Ginsberg has created a digital AI tool named Pollinator Pathmaker to design the best possible gardens for bees and other insects to enjoy.

At the same time, people are invited to participate in their private gardens, by using the Pollinator Pathmaker online tool to create a planting plan tailored to their plot.

The work is intended to raise awareness about the decline in pollinators, which as well as bees includes butterflies, moths, wasps, beetles and other species that are essential for plant reproduction and ecosystem survival.

At the same time, Ginsberg aims for the project to build empathy with other species.

"I wanted to make art for pollinators, not about them," said Ginsberg. "Pollinator Pathmaker is an ambitious art-led campaign to make living artworks for other species to enjoy."

"Modern humans have reshaped the planet for our own benefit, while forgetting that other
species and their needs are essential to our own survival," she told Dezeen.

"Decentring ourselves is a powerful way to think about other species: encouraging us to see the world as they do, to have empathy for them, and most importantly to inspire humans to care for them."

Ginsberg sees Pollinator Pathmaker as encoding empathy into an algorithm, in this case by defining empathy as a design that would support as many pollinator species as possible. 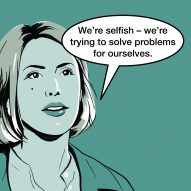 She worked with horticulturalists at the Eden Project, which first commissioned the project, along with pollinator experts and Google Arts & Culture to develop the digital tool.

It asks the user to input information about the size and conditions of their plot, and then play with the "empathy" sliders to choose whether they want more or fewer plant species, a bold or intricate pattern, and a flight path or patches.

Some pollinators, such as bees, learn and memorise an efficient route for themselves, so they would be drawn to the flight path, while other insects explore more randomly.

The algorithm generates a different garden design each time, which users can see as a 3D visualisation composed of Ginsberg's digital plant paintings. They can also see how it will change from season to season and what it looks like in "pollinator vision".

To realise the garden design, they download planting instructions, which come complete with a certificate of authenticity for their editioned artwork.

The Serpentine's version of the artwork fills a 227-metre-long area in Hyde Park's Kensington Gardens with more than 60 species of plants. It is part of the institution's newly opened Back to Earth programme, themed around the environmental emergency.

The garden is intended to be in place for two years, during which time the artist hopes to open further editions worldwide, using each commission as an opportunity to develop a new regional "plant palette" so the tool can be used in more locations.

"The aim is to make the world's largest climate positive artwork," said Ginsberg. "Each time a large Edition Garden, like the two we've planted in the UK, is commissioned, we create a new plant palette for the region and donate this back to www.pollinator.art to encourage local visitors to join in and plant their own artworks."

"Gardens are not isolated entities; they are interconnected in the landscape. Your flourishing garden supports the flourishing of your neighbour's, so we need as many pollinator-friendly gardens as possible to be planted."

Ginsberg's art focuses on technological and environmental themes. Her past work has included Machine Auguries, which artificially recreates the dawn chorus of birds, and The Wilding of Mars, which explores what would happen if the red planet were colonised by plants and not humans.