Invisible Studio has unveiled the Beezantium, a lakeside apiary for honey bees in the grounds of The Newt in Somerset hotel in England.

With several hives built into its walls, the Beezantium is designed to house bee colonies but also serve as an exhibition centre for hotel guests and visitors.

Invisible Studio founder Piers Taylor designed the building as "a folly in the landscape", referencing the whimsical pavilions that have been created in English formal gardens for centuries.

The design features various sculptural flourishes, including a curving roof clad in copper shingles and punctured by oval-shaped windows.

Other details are designed to suit the building's practical function, for instance, the walls are clad in large panels of unseasoned oak that offer natural holes for the bees to enter through.

A system of copper pipes has also been built into the building's structure, to make it easier for bees to fly in and out.

"The Beezantium has been designed to provide a sensory, otherworldly experience," said Taylor.

"It appears jewel-like, quirky and playful, almost like a folly with a glowing copper roof. But instead of being only about pleasure, the Beezantium is a purposeful building designed to house bees in observation hives in the external walls."

The apiary was designed in collaboration with beekeeper Paula Carnell and includes habitats for wild bees, solitary bees and other species.

"There are numerous smaller habitats in the apiary provided for wild bees and solitary bees and the hives that were relocated into the apiary were wild swarms that already existed locally but needed to be moved as in various cases trees they were in had fallen," explained Taylor.

"Also, we designed the cladding specifically to encourage the creation of habitats for other species!"

The Newt in Somerset is located at Hadspen House, a former country house with an 18-hectare estate in rural Somerset.

The site chosen for the Beezantium was previously used as a rubbish tip. But Taylor and the hotel owners, Karen Roos and Koos Bekker, felt that a waterside location would suit the building well.

"Lakes feature prominently in the tradition of follies," said Taylor.

"Also we wanted the surprise of entering a building that looks small from a distance, but is much larger when you enter," he continued.

"Then there's a surprise at the end when you've moved through the exhibition, and the landscape is presented through a bay window."

With the apiary in the walls, there was plenty of space in the centre of the room for an interactive showcase featuring hexagonal education panels and a large seating pod. 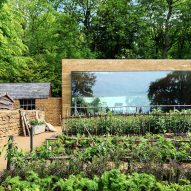 The yellow tones of the exhibition complement the walls, which are lined in slats of polished honey oak.

The space is naturally lit, thanks to a skylight overhead and the large bay window.

The Beezantium is not the only design that Invisible Studio has contributed to The Newt in Somerset. Taylor also designed the gym building, which he imagined as one giant window.

Other recent projects by the practice include a slate-clad home on Cornwall's northern coast and a retrofit of Taylor's own off-grid home.

The Newt in Somerset's owners Karen Roos and Koos Bekker also own the Babylonstoren wine estate and hotel in South Africa.